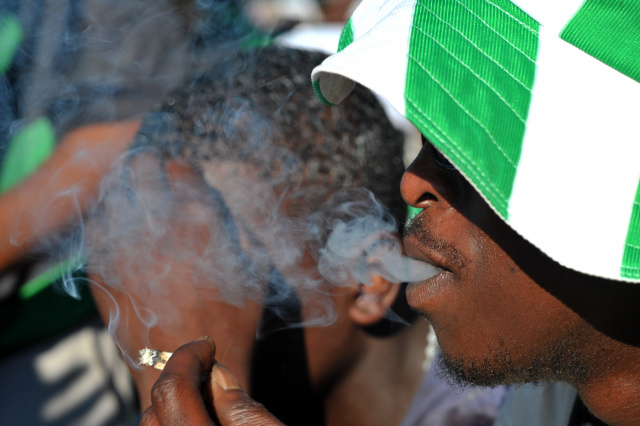 A football fan smokes in a soccer stadium in Bloemfontein on March 6, 2010. At any South African football match, the scent of grilled meats and simmering stews wafts through the gates as vendors serve up chicken feet, sheep head and sausages to arriving fans. But World Cup visitors will receive a more sanitized experience as FIFA's stringent commercial rights put a stop to the makeshift kitchens run by informal traders who normally ply their wares outside stadiums. FIFA regulations stipulate that only its commercial partners are allowed to trade and promote their products within an 800-meter radius of stadiums and fan parks in the country's nine host cities. (ALEXANDER JOE / AFP)

(AFP) - British American Tobacco South Africa (BATSA) went to court on Wednesday for the first day of hearings in a case against a government-imposed ban on tobacco sales to limit the spread of coronavirus.

South Africans have been unable to legally purchase cigarettes since the country went into a strict nationwide lockdown on March 27.

While confinement measures are being gradually lifted, tobacco products have remained banned for the time being due to "health risks" associated to smoking.

BATSA, which covers 78 percent of the legal cigarette market in South Africa, decided to sue the state in May after talks with the government fell through.

Speaking before the Western Cape High Court on Wednesday, BATSA advocate Alfred Cockrell argued the ban was "unconstitutional" and "unscientific".

Cockrell said the measure had "devastated" the tobacco industry in an already ailing economy and was costing the state around 38 million rand ($2.2 million) per day in excise taxes.

Government representative Andrew Breitenbach argued the case was about "lives and livelihoods" but said the minister behind the ban had "taken steps" to allow trade between tobacco producers and cigarette manufacturers.

"The ban deals with prohibiting sales," Breitenbach added. "So infringements on rights are just incidental."

BATSA estimates that South Africa has around 8 million smokers.

Its legal action has been backed by Japan Tobacco International and by groups and organisations representing consumers, retailers and tobacco farmers, who agree that the ban is fuelling an illicit cigarette market.

The Fair Trade Independent Tobacco Association (FITA) legally challenged the "irrational" ban last month, claiming it has diverted revenue away from a multi-million dollar business and into the black market.

The court has since ruled in favour of the government but granted FITA leave to appeal.

BATSA's case is scheduled to resume on Thursday.

South Africa was already in recession before the coronavirus struck in March and the economy is now forecast to contract by more than six percent this year as a result of the pandemic.

The country is the hardest-hit in Africa with at least 521,318 infections diagnosed so far, accounting for more than half the continent's cases.

Its mortality rate has remained low however, with just over 8,800 deaths reported to date.