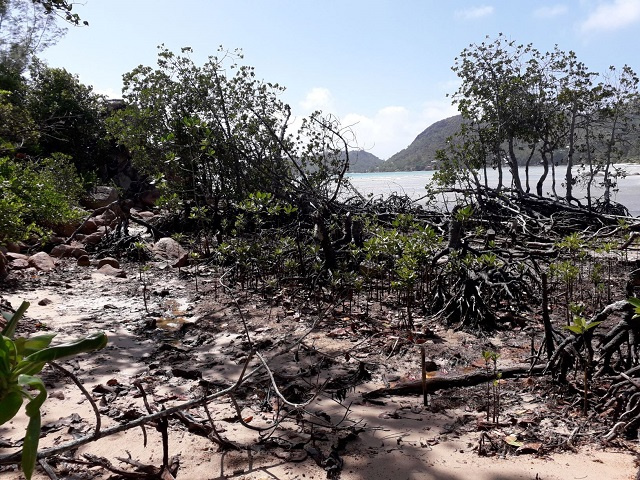 The aim of the project is to also remove invasive plant species encroaching on the wetlands and replant native species, to reduce soil erosion from the land into the Curieuse marine park as well as enhancing the overall biodiversity. (Elvina Henriette)

(Seychelles News Agency) - Preventing the loss of wetland on Seychelles’ second most populated island – Praslin - by enhancing vegetation cover on degraded foothills of the wetlands is the aim of a new project.

The project - a community-based ecological coastal rehabilitation effort using an ecosystem approach – is being implemented at Pasquiere. The Praslin-based not for profit organisation Terrestrial Restoration Action Society of Seychelles (TRASS) is undertaking the restoration work.

It aims to also remove invasive plant species encroaching on the wetlands and replant native species, to reduce soil erosion from the land into the Curieuse marine park as well as enhancing the overall biodiversity. Elvina Henriette, biodiversity consultant working with TRASS, explained that the project is centred on the use of natural solutions known as ecosystem-based approaches, by local groups and communities, to rehabilitate the degraded area.

“The hills of Pasquiere have previously suffered from numerous forest fires and now they lay almost bare with little vegetation. The rains sweep away the soils from the hills, which gets deposited into the marsh and rivers downstream,” explained Henriette. Henriette said that as a result “the marsh gets clogged up with sediments, which favours the establishment and spread of invasive plant species like the Cocoplum, Albizia and Bwa zonn.”

The consultant added that these invasive plants smother and prevent the growth of native plants. “Both the washed down sediments and the invasive plants block the marsh hence hampering the marsh from its normal function. Sediments also end up into the Curieuse marine park, which borders the project site,” said Henriette.

The 18-month project will include a survey of the marsh, mangrove and the hills to come up with the rehabilitation plan, training of participants in techniques for inventory, monitoring and plant identification, plant production in TRASS’ nursery as well as reforestation of the hills.

Marc Jean Baptiste from TRASS said that at the end of the project they expect to see the wetland restored to its original state. “With the degradation that has happened, with invasive plants which have colonised the marsh and this project is expected to breathe in new life into the wetland as well as restoring its ecosystem.”

Praslin Eco based Adaptation Watershed Committee is one of the supporting partners of the project. Group member Vicky Stravens said that this project will allow the committee to create ongoing public awareness on the importance of wetlands. “We need to educate people on the importance of the wetland in general as well as the different species, not only plants that live in the wetlands,” explained Stravens.

The rehabilitation and management of the Pasquiere wetland on Praslin are also expected to influence procedures and policies regarding habitat rehabilitation using landscape-level and ecosystem-based approaches. It is being funded by the United Nations Environment Programme (UNEP) through the Western Indian Ocean Strategic Action Plan (WIOSAP).