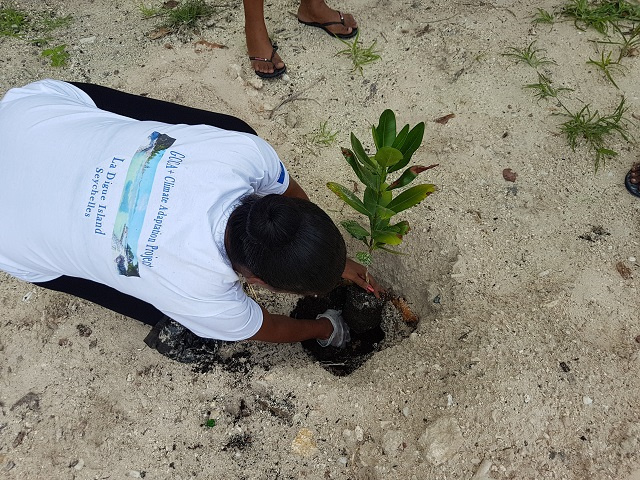 Let us as a nation take this opportunity to pave a new way forward in this national initiative to make Praslin a greener tropical island. (Gerard Larose)

(Seychelles News Agency) - Employees from the tourism industry who have lost their jobs due to COVID-19 are joining in an ambitious project to plant 500,000 trees in a bid to reforest Seychelles’ second-most populated island.

The opening phase of the project will see 100,000 trees planted from this month to the end of December and the are expected to plant native and agroforestry trees on some of the most deforested areas of Praslin.

The project initiated by Seychelles Employee Transition Scheme (SETS) will be implemented by the Terrestrial Restoration Action Society of Seychelles (TRASS), a Praslin-based environmental group committed to the restoration of degraded terrestrial sites of the islands of Seychelles. The chief executive of SETS, Guy Morel said that the environmental conservation project is being named ‘Rebwaz mwan’: Praslin, calling to be reforested.’

“This is an ambitious project but if we need transformation we need to take bold steps. This project already existed and was being done by TRASS and by increasing the number of trees to be planted, we will cater for the people made redundant on Praslin,” Morel said.

The Seychelles Employee Transition Scheme (Sets) is a non-profit public sector enterprise mandated to facilitate the reskilling and placement in economic activity of persons made redundant as a result of economic decline following the COVID-19 pandemic.

The biodiversity consultant working with TRASS, Elvina Henriette, told SNA on Thursday that the success of the campaign relies on this very important labour force.

“The initiative by TRASS and SETS comes at a very opportune time, now that the COVID-19 pandemic has made humanity realize the importance of nurturing our relationship with nature. In many countries around the world, nature/wildlife has made a come-back. Let us as a nation take this opportunity to pave a new way forward in this national initiative to make Praslin a greener tropical island,” said Henriette.

Henriette added that the exercise will involve staff from coco de mer, Lemuria, Berjaya Praslin Beach, Raffles, and Acajou – all tourism establishments from the island.

According to Henriette, this will be the biggest tree planting campaign ever undertaken in Seychelles. The seedlings will be planted on degraded land in selected areas on Praslin for environmental protection and conservation of important ecosystems. The sites cover both mountain and coastal including wetland areas.

The biodiversity consultant explained that the group will be involved in different tasks in preparation for the actual planting. “We will have a nursery team to produce and maintain plants in the nursery, one team to collect humus and soil, another will collect seeds, cuttings and wildlings as well as one responsible to clear invasive plants in areas to be planted amongst other tasks,” said Henriette.

TRASS is ensuring the success of the plantings by also having a watering team which will water all of the 500,000 plants for six months after planting. The organisation has also received permission from several landowners to rehabilitate their lands as part of their contribution to this initiative. The initiators of the project – SETS and TRASS – are signing a memorandum of understanding for this project whose implementation will start on August, 24.