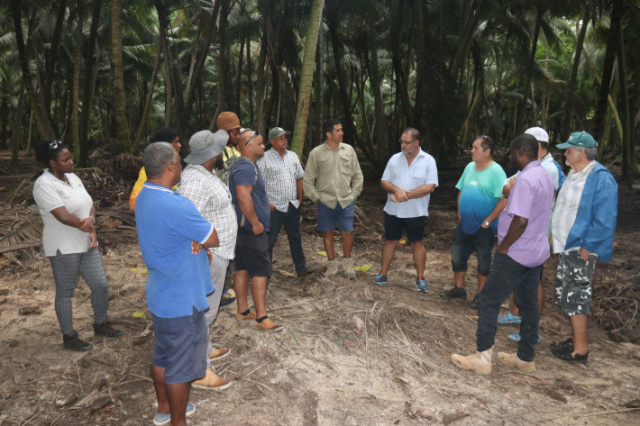 The farmers this week took a tour of Coetivy, one of the islands earmarked for farming, organized by the Islands Development Company, which is responsible for the development of these islands. (Seychelles Nation)

(Seychelles News Agency) - Farmers in Seychelles are being asked to develop large-scale agriculture on the outer islands of the archipelago.

The farmers this week took a tour of Coetivy, one of the islands earmarked for farming, organized by the Islands Development Company, which is responsible for the development of these islands. The company is hoping to partner up with the farming community for crop and livestock farming.

Christian Lionnet, the deputy chief executive of the company, said the visit follows meetings held during the last few months to discuss the idea and the way forward following a decision taken by the board of directors early this year to turn Coetivy into an agricultural island.

According to Lionnet, Coetivy is one of the most fertile outer islands and is suitable for farming on a commercial basis.

The farmers on the visit represented communities from Mahe, Praslin and La Digue, the three main islands of Seychelles – 115 islands in the western Indian Ocean.

Apart from visiting the areas made available for farming, the group also saw some of the living quarters, clinic, warehouses as well as shop, facilities used the Seychelles Market Board (SMB) during the prawn farming days.

Roger Morel, from the La Digue Farmers’ Association, acknowledged the agricultural potential of the island and encourage farmers on La Digue, to think of investing in farming on Coëtivy.

Jean-Paul Geffroy, from the Agricultural Producers Association Seychelles (Apas), said there is the potential for large scale agriculture on Coetivy but that “due to the remoteness of the island, it would be difficult for a farmer to venture on his own other than do it collectively.”

According to IDC if all goes to plan, by the end of 2020, a working agreement is expected to be reached between the company and potential partners to set the way forward for the start of cultivation by next year and with the first harvest expected by mid-year.

Coetivy is a coral island situated 290km south of the main island of Mahe. The island was traditionally used for agriculture and up to 2006, Coetivy had the island nation’s only aquaculture plant, for prawn farming. After that, it was used as a prison facility.

Sister Islands of Seychelles and Mauritius pledge to increase trade