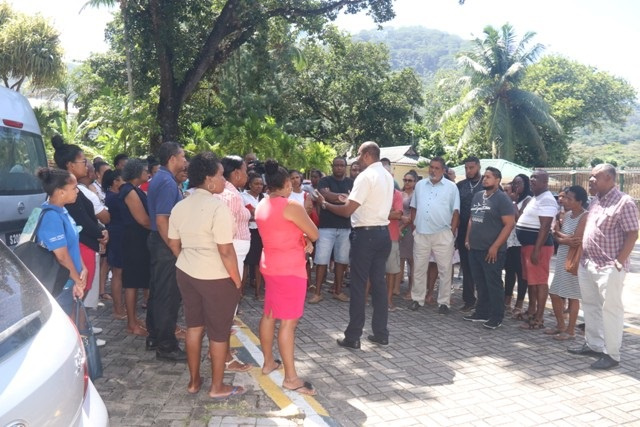 Workers went on strike on Thursday after the two establishments failed to pay their full July salaries by August 5 as required by law. (Patrick Joubert)

(Seychelles News Agency) - A company managing Coral Strand and Savoy Resort and Spa, two tourism establishments in Seychelles, has been given a 48-hour notice to pay in full the basic salary of their Seychellois staff, a top employment official said on Thursday.

The principal secretary for employment, Jules Baker, made the statement after a meeting with representatives of the staff and management and the chairperson of the Seychelles Federation of Workers Union, Antoine Robinson.

The notice was given after the two establishments failed to pay their employees their full July salaries by August 5 as required by law, which resulted in a strike by the workers on Thursday. The staff of Savoy had been paid 89 percent and Coral Strand 41 percent of their salaries excluding tax and pension payments.

"We have given them a 48-hour timeline to negotiate with their head office in Russia with which we are also in negotiation and we expect that we will sort this out within 48 hours. If it is not sorted out, appropriate actions will be taken," said Baker.

Coral Strand and Savoy Resort and Spa are owned and operated by Eastern European Engineering Limited, a company registered in Seychelles which is a subsidiary of holding company Guta group which is a multinational conglomerate with headquarters in Russia.

Earlier this week, the Secretary of State for Finance, Patrick Payet, said that the hotels had defaulted on paying their taxes despite the fact that they were being assisted to cover those payments as well as the basic salary for all the Seychellois staff.

As a result, the government withheld the financial assistance for salaries for Seychellois staff which it is offering to businesses having difficulties as part of its COVID-19 impact alleviation programme.

"We did that because when we looked into their account the amount they were supposed to pay was there and we saw they had sufficient funds to pay their staff when added to what we had given them," said Payet.

While the management of the two hotels did not pay taxes with the Seychelles Revenue Commission, it had deducted the amount due to each employee last month.

"We did not get a payslip, but from the notification which I got from the bank, there was no change from previous months, so it was clear that they had deducted the income tax and the pension fund contribution," Randolphe Nicette, a Savoy staff said.

The chairperson of the Seychelles Federation of Workers Union, Antoine Robinson, expressed his disappointment and insisted that the government takes action against the company for mistreating Seychellois workers.

The Eastern European Engineering company which manages the two establishments in Seychelles, an archipelago in the western Indian Ocean, are also being taken to court for not paying the salary of their foreign workers.

"We have already started a case against the hotel for non –payment to the expatriate staff. We have concluded the paperwork and it is set to be filed soon. If the management defaults on this deadline also we will take that case to court as well and equally take other actions," said Baker.