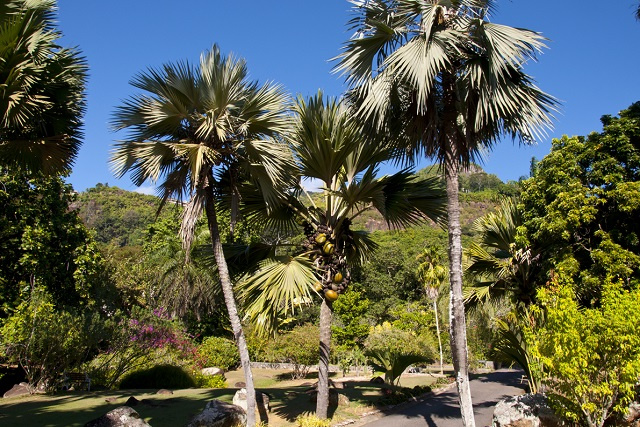 Fleischer-Dogley outlined that since the coco de mer grows to between 25 metres and 34 metres tall, the property owner will need an area of 10 by 10 metres per seed. (Gerard Larose, Seychelles Tourism Board)

(Seychelles News Agency) - Property owners in Seychelles who would like to grow a coco de mer palm on their land can apply for a seed to plant with the Seychelles Islands Foundation in a newly launched campaign to conserve the iconic species.

For SCR500 ($28), a person can apply to plant up to five seeds on their property, SIF's chief executive, Frauke Fleischer-Dogley, said at a recent press conference.

The coco de mer is the world's largest and heaviest nut, which when mature weighs between 15 to 30 kg. The species is endemic to Seychelles, an archipelago in the western Indian Ocean, and grows on Praslin and Curieuse, where SIF said the population is healthy.

Interested persons will need to submit details pertaining to the land on which the seed will be planted. This will include the name of the property owner, address, parcel number and contact details of the person. Other criteria, such as soil type, will be taken into account during the site visit. Applications will be accepted until December.

Fleischer-Dogley outlined that since the coco de mer grows to between 25 metres and 34 metres tall, the property owner will need an area of 10 by 10 metres per seed.

"We want to make sure that the coco de mer plant will not be cut down later as the site it was planted on isn't convenient. When the location has been visited, we will help the person obtain a coco de mer from Vallee de Mai," said the chief executive.

Coco de mer seeds for the public will mostly come from Vallee de Mai, where 50 to 60 nuts are collected per month, however, this does not mean that the Foundation has a stock of coco de mer seed that is ready to be planted available.

"A coconut is viable for planting when collected shortly after it has fallen; it cannot be a few months old when it is to be planted. We will do our best to pick up all the nuts that are falling. Once the coco de mer reaches the destined island where it will be planted, an officer from SIF will need to be present when the coco de mer is being planted," she said.

A follow-up will be done six months later to ensure that the coco de mer is growing healthily. If the seed fails to sprout, the nut will be replaced if the foundation is satisfied that it is the same seed that was planted. To know if a tree is a female or male, a person will need to wait until the tree blossoms.

The director general of the biodiversity management and conservation, Marie-May Muzungaile, said that despite the waiting time for a person who has enough space, this should be of national pride.

She added that "in the long term, this will become a good investment for them. It is a beautiful species to have at home and I am sure that many will be proud to say that they have a coco de mer tree on their property."