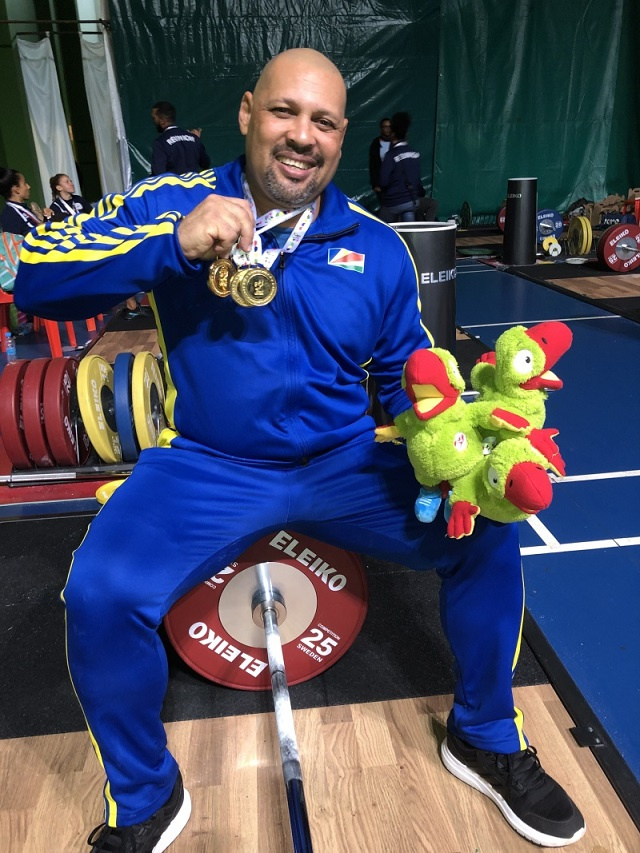 (Seychelles News Agency) - Seychelles' highest-achieving and most experienced weightlifter is retiring from the sport for medical reasons.

Steven Baccus, 42, is the most-decorated Seychellois athlete in the 40-year history of the Indian Ocean Island Games (IOIG). He won three gold medals each of the six times he participated in the Games, bringing his total medal count to 18.

After winning three golds at the 10th Indian Ocean Island Games in Mauritius last year, Baccus qualified for the All Africa Games which took place in Morocco.

It was while preparing for the All Africa Games that he started getting back pain.

"While training for the All Africa Games I suddenly felt a pain in my back. After seeing the NSC (National Sports Council) doctor I was told that this is was not serious and I could still compete. But three days before the Games, I tried to lift some weight and the pain came back stronger," he told SNA.

Baccus had to forfeit the Games and on his return to Seychelles went for a CT scan and was informed he had two slipped discs.

"The doctor told me that I can still do weightlifting but if I do the situation will become worse. He advised me to stop entirely," said Baccus.

The weightlifter said he is disappointed that he cannot practice the sport anymore especially as he has been doing it for a long time.

"It is not easy after all this time to just stop. I would have liked to retire slowly from international competition but participate locally and have time to encourage more young people," he added.

Baccus, who is a trained firefighter with the Seychelles Civil Aviation Authority, started weightlifting at age 17. He participated in the 1996 Summer Olympic Games in Atlanta, competing in the men's 83 kg event and finishing in 16th position. He participated at the Indian Ocean Island Games for the first time in 1998 and has come out victorious in all editions of the IOIG since then.

The national weightlifting coach, William Dixie, told SNA that he is proud of what Baccus has achieved "but we knew that at his age it will become more difficult for him to continue performing at high level for much longer."

Dixie said the Seychelles Weightlifting Association will miss a weightlifter of his calibre because "Baccus performed with his heart and trained almost every day. It will be difficult to get another one with such love for the sport."