New justice from Botswana sworn in to Seychelles' Court of Appeal 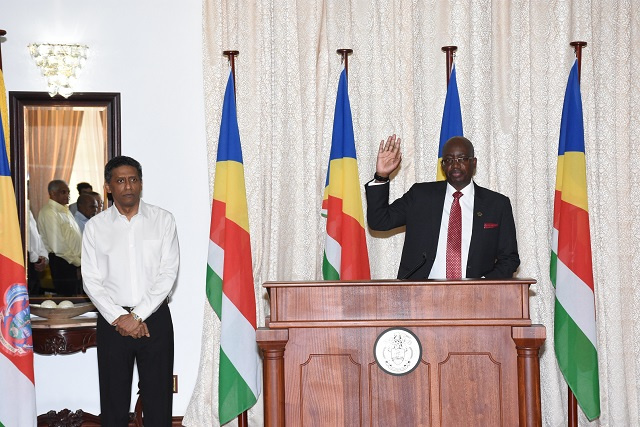 Oagile Bethuel Key Dingake from Botswana took his oath as a Justice of Appeal in a ceremony at State House. (Seychelles Nation)

(Seychelles News Agency) - A new Justice of Appeal in Seychelles who was sworn in on Thursday said his job will encompass working on a wide range of cases.

Oagile Bethuel Key Dingake from Botswana took his oath as a Justice of Appeal in a ceremony at State House.

The President of the Seychelles' Court of Appeal, Anthony Fernando, said he believes that Dingake will make a good Justice and will bring "invaluable contributions in the work that we are doing."

He added that the Court of Appeal is now fully equipped with five justices and will be having its next session in September.

The Court of Appeal has presided over 28 cases since it resumed worked and are scheduled to deliver the judgments by August 21.

In 2018, he became the first African to swear in as a judge of the Supreme Court of Papua New Guinea, where he presided over appeals from the national court.

Dingake's 20-year career includes academia, legal practice, the corporate sector and the judiciary. He has served for more than a decade as a judge of the Botswana High Court and facilitated numerous judges training in the Southern African Development Community (SADC) region including Seychelles.

The Seychelles' Court of Appeal generally has three sessions a year -- usually in April, August and December -- wherein it hears appeals and applications. Each session lasts two weeks. Usually, the court will pass judgment on all matters heard before it on the last day of a session.

Dingake, who has a great passion for writing books, said that he will definitely be writing one to share his experience in Seychelles.