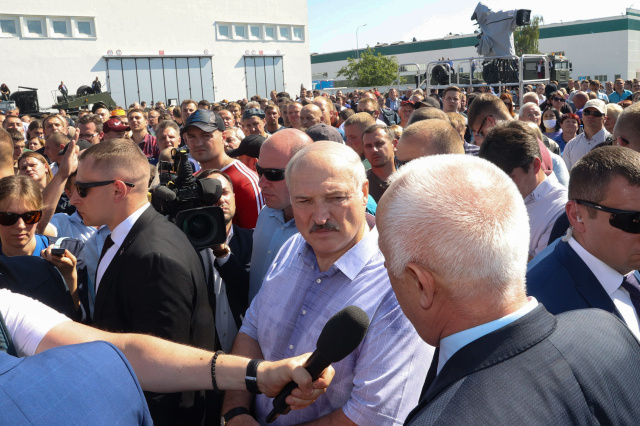 Belarus' President Alexander Lukashenko (C) visits the Minsk Wheel Tractor Plant (MZKT), in Minsk, on August 17, 2020. The Belarusian strongman, who has ruled his ex-Soviet country with an iron grip since 1994, is under increasing pressure from the streets and abroad over his claim to have won re-election on August 9, with 80 percent of the vote. Lukashenko met with workers at the plant and downplayed the protests, saying that in general factories were working.(Nikolay PETROV / BELTA / AFP)

(AFP) - EU leaders will hold a emergency video talks on Wednesday to discuss the crisis in Belarus, where protests are swelling against the disputed re-election of President Alexander Lukashenko.

The summit was called by EU Council President Charles Michel after Moscow said it was ready to provide military help to its ally Lukashenko, who has ruled Belarus for 26 years.

Tens of thousands of people have taken to the streets to condemn Lukashenko's election win and a subsequent violent crackdown on protesters by riot police.

"The people of Belarus have the right to decide on their future and freely elect their leader," Michel tweeted, saying Wednesday's virtual summit would begin at 12:00 pm (1000 GMT).

"Violence against protesters is unacceptable and cannot be allowed."

A European source said Michel decided to call the summit in view of the spike in tensions over the weekend.

Lukashenko claimed victory in the August 9 election with 80 percent of the vote, despite wide opposition to his rule.

EU foreign ministers on Friday agreed to draw up a list of targets in Belarus for a new round of sanctions in response to the crackdown and on Monday Germany, which currently holds the EU's rotating presidency, said it was ready to back even tougher measures.

General » Be a reporter: Write and send your article » Subscribe for news alert
Tags: Belarus, Vote