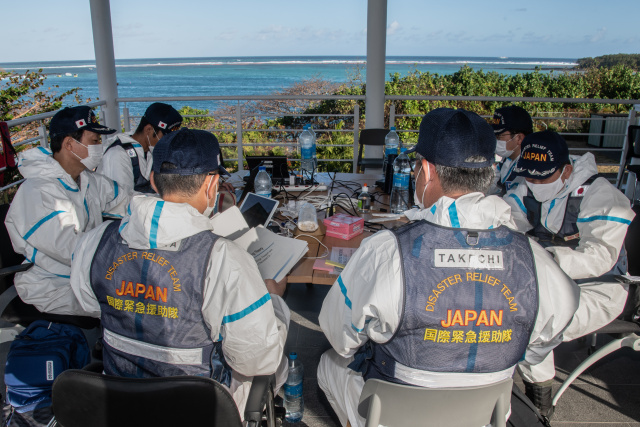 Members of Japanese Disaster Relief Team work for oil spill disaster caused by the agrounded vessel MV Wakashio, belonging to a Japanese company but Panamanian-flagged, at the Blue Bay Marine Park Centre in Blue Bay, on August 16, 2020. A ship that has leaked more than 1,000 tonnes of oil in pristine waters off the coast of Mauritius has split in two. The bulk carrier MV Wakashio ran aground on a coral reef off the southeastern coast of Mauritius on July 25 and began oozing oil more than a week later, threatening a protected marine park boasting mangrove forests and endangered species.  (Fabien Dubessay / AFP)

(AFP) - France is sending more experts to Mauritius Monday to help decide the fate of a grounded ship leaking oil into pristine waters off the coast of the Indian Ocean island.

The three additional experts will be tasked with helping the Mauritian government determine what to do with the wreck, which has split in two, Sebastien Lecornu, minister for France's overseas territories, told Franceinfo on Monday.

France was in favour of an "environmental approach and protection of biodiversity, and particularly the coast of La Reunion," he said.

Possibilities include sinking part of the ship in the open sea, which "is clearly not our preferred solution", or to tow the wreck elsewhere and destroy it, which would require "more time", the minister said.

No oil deposits have yet reached Reunion, he added.

The Japanese bulk carrier MV Wakashio ran aground on a coral reef off the southeastern coast of Mauritius on July 25 and began oozing oil more than a week later, threatening a protected marine park with mangrove forests and endangered species.

Officials said over the weekend that the ship had broken in two.

Mauritius declared an environmental emergency and salvage crews raced against the clock to pump the remaining 3,000 tonnes of oil off the stricken vessel.

After visiting Mauritius, Lecornu returned to La Reunion late Sunday and said he believed the clean-up would involve "at least 10 months of work".