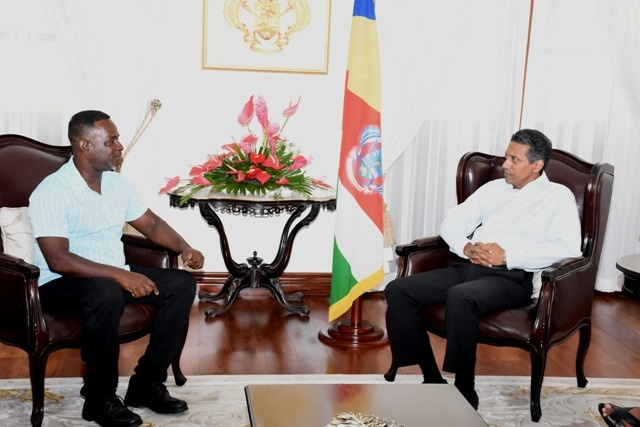 Mathiot was commended for his heroic act by President Danny Faure at State House on Wednesday. (Seychelles Nation)

(Seychelles News Agency) - A man who rescued an 8-year-old girl screaming for help from inside a burning house was commended for his heroic act by Seychelles' president at State House on Wednesday.

President Danny Faure expressed his honour to receive a local hero at State House and on behalf of the people of Seychelles conveyed his sincere appreciation to Cliff Mathiot for his bravery and courage that ensured a little girl is still alive today.

"On behalf of the country, I would like to say thank you for your courage and selfless action. You risked your own life to save another and for that, we are profoundly grateful," said Faure.

Mathiot who is also a father, told the press that he did what needed to be done to save the girl from a burning house in Petit Paris, Cascade on Monday.

"I have a 10-year-old girl, and just the thought that a child would have burnt in a building pushed me to act," said Mathiot.

He explained that on the day of the fire, he was in the vicinity of the scene, talking to a man who was polishing his car, whilst waiting for the owner of the house that caught fire, when he heard a child screaming.

"I heard a scream coming from inside and I asked the guy to go check. He laid down his tool and went to see. Upon reaching the door, he signalled for me and when I got there, he told me that there is a fire in the house. I went to the door and saw that the living room ceiling was already on fire," explained Mathiot.

"I didn't hesitate and went in, listening only to the voice of the child. I got her out. By that time the fire had engulfed the house and no one would have been able to go back in to remove anything else," he continued.

He said the girl was waiting alone in the house for her father to come back and was in a bedroom when he rescued her. The windows of the bedroom had burglars' bars and could not be used as an exit point.

"The only way in was through the door. As I didn't know the layout of the house, I was guided only by the voice of the little girl," said Mathiot, who has served nine years in the army.

When firemen who were mobilised to the scene at about 11 a.m. reached the location, Mathiot had already saved the girl, who was in shock, and the house had been completely engulfed by flames. The house was home to a family of four.

Officers from the Seychelles Fire and Rescue Services Agency extinguished the fire.