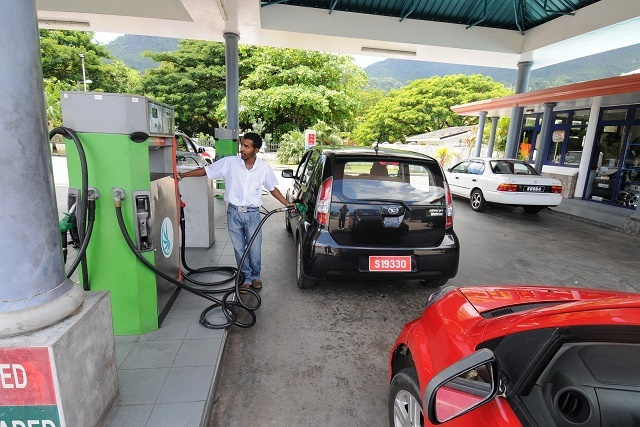 Any devaluation of the rupee will cause an increase at the pumps, as more rupees will need to be collected to pay off the supplier. (File photo: Louis Toussaint)

(Seychelles News Agency) - The Seychelles Petroleum Company (SEYPEC) has projected a loss of SCR 83 million ($5 million) in revenue this year as a result of a decrease in domestic consumption of fuel but yearly return will not be affected, a top official said on Thursday.

The company's chief executive, Conrad Benoiton, told a press conference that consumption of fuel has gone down largely because of a major halt in business activities within the aviation and tourism industry during the period of COVID-19.

He said that despite the loss, the total yearly return will not be affected as the company also has re-export earnings from the use of its tankers.

"Our re-export activities within the aviation and the industrial fishing sectors contribute to 60 percent of our turnover. This year we are expecting to pick up around SCR200 million ($11 million) as profit. But as business activities resume, we expect our revenue to rebound to what it was before when we were collecting up to SCR300 million ($17 million)," said Benoiton.

The commercial general manager of SEYPEC, Sarah Romain, said that one of the main factors affecting the company is the increase in the rate of the dollar.

"As a result of reduced foreign exchange inflows, the rate for the dollar to the rupee has jumped from 14.22 in March to almost 18.25 in July. Given that fuel is transacted in dollars, any devaluation of the rupee will cause an increase at the pumps, as more rupees will need to be collected to pay off the supplier," she said.

Another factor is the rate at which the company is sourcing the fuel from its suppliers.

"There are costs related to crude oil when being extracted. We need to pay for insurance in case we encounter any piracy incidents. We have natural disasters and this year we are having COVID-19. All the cost incurred has an impact on the price of fuel locally," said Romain.

The operations of SEYPEC, a company founded in 1985 following the closure of the then Shell Oil Company, revolve around the supplying of fuel to the domestic market, bunkering of vessels, aviation refuelling activities and the management of its shipping arm.

The company has a fleet of six tankers out of which five call upon ports in America, Canada, and South Africa. The bulk of their business is transporting Russian fuel into European ports such as Denmark, Netherlands, Belgium, France, Spain, Portugal, and the UK down to Italy.