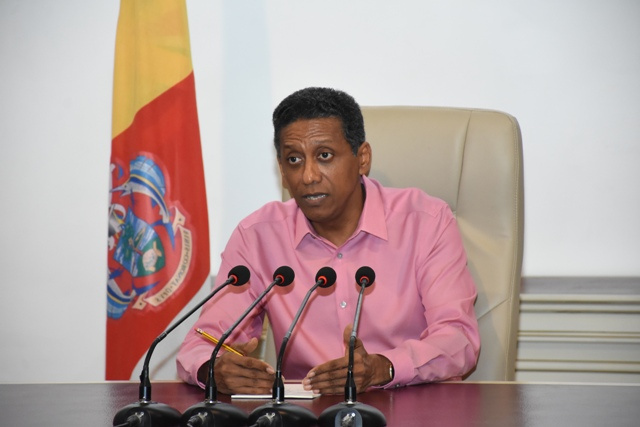 Faure answered questions from reporters on various subjects in what he said was his last live news conference. (Seychelles Nation)

(Seychelles News Agency) - Some missing persons in Seychelles are linked to a drug trafficking network involving Iran, according to intelligence shared by a friendly country, President Danny Faure said in a live press conference on Thursday.

"We have concrete information today that certain Seychellois boats are in the drug fetching business with boats from Iran. The intelligence information revealed that Seychellois have boarded the Iranian boats and those Seychellois are today in Iran," said Faure.

He said those Seychellois will only be released when the money for the drugs is paid, and he called on anyone including family who may be in contact with associated Iranians to notify the police force. Faure did not say which nation shard the intelligence information.

Faure answered questions from reporters on various subjects in what he said was his last live news conference because of the upcoming political campaign ahead of presidential elections in October.

Elsewhere, the President said policies are being set to help create job opportunities for Seychellois.

"The decision taken recently with regards to foreign workers with GOP (Gainful Occupation Permit) currently abroad has to do with our present employment situation. Our priority today is to ensure that Seychellois gets a job," he said.

Gainful Occupation Permits (GOPs) of foreign workers in Seychelles currently out of the country were revoked with immediate effect beginning of August and companies that need the employees back have to go through a new process.

There are 16,000 people in Seychelles, an archipelago in the western Indian Ocean, being assisted financially, according to the information given by the Ministry of Finance for the month of May.

Faure said that this includes young people who are being assisted through various schemes which comprise of an internship programme, My First Job, skills development and the Unemployment Relief Scheme (URS).

On the economic situation of the country after the re-opening of the airport on Aug. 1, the President said that the figures he has received is 1,592 visitors have come to Seychelles but hopes that it will pick up in September and October.

He added that the decision to reopen the airport was taken after looking at Europe where Seychelles' main tourist markets are, namely France, Italy and Germany, but last week the situation changed.

"COVID is still upsetting France and we had to remove the country from our permitted list. While we are reopening for tourists the situation in those countries are not improving," said Faure.

On the question on cohabitation between the executive from one party and an opposition majority in the legislative, Faure said that Seychelles witnessed an interesting time in the last four and half years. After the legislative elections in September 2016, the opposition coalition, Linyon Demokratik Seselwa (LDS) won the majority seats in the National Assembly.

"The work that the Assembly did allow checks and balances as required by the Constitution and government acted and worked... But at the same time, there has been abuse and one of them is that the government also became a victim," said Faure.

On his priority for the coming two months, Faure said he will "make sure that Seychellois behave as responsible citizens for us to have an election that takes place in peace and stability."