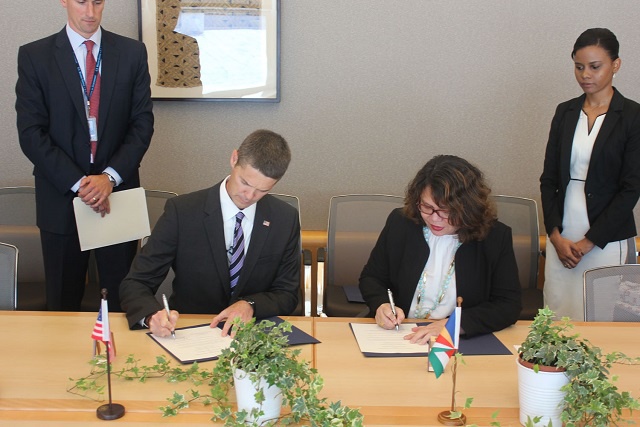 (Seychelles News Agency) - Seychelles has concluded the last outstanding bilateral trade negotiations with the United States moving one step closer to attaining the objective of acceding to the World Trade Organisation, WTO.

In a press statement issued this afternoon, the Seychelles Ministry of Finance, Trade and Investment said the final bilateral agreement was signed in Geneva Switzerland, yesterday.

The Indian ocean archipelago's Ambassador in Brussels, Vivianne Fock-Tave signed the agreement on behalf of the Seychelles government whilst Ambassador Michael Punke signed for the United States of America.

“With the signing of this last bilateral agreement Seychelles has now overcome the final hurdle toward accession, in what has been  a lengthy and arduous, but nevertheless rewarding process,” read the statement.

“Seychelles will now host its 8th Working Party meeting in Geneva next month, which is expected to be the last, prior to formal acceptance into the organisation.”

Following the Seychelles' sixth WTO Accession Working Party meeting in July, the Director-General of the Trade Division, in the Ministry of Finance, Trade and Investment, Cillia Mangroo told SNA that Seychelles is hopeful that it will join WTO in 2014.

“From our meetings with other countries and the WTO secretariat, it is a target that we can meet,” she said.

In today’s statement following the signing of the last bilateral agreement with the United States, the Ministry of Finance, Trade and Investment said Seychelles’ acceptance as a member of the WTO is expected to be made at the organisation’s Council meeting, to be held in December this year.

The WTO’s membership currently stands at 160 member states, accounting for over 97 percent of the world's total trade.