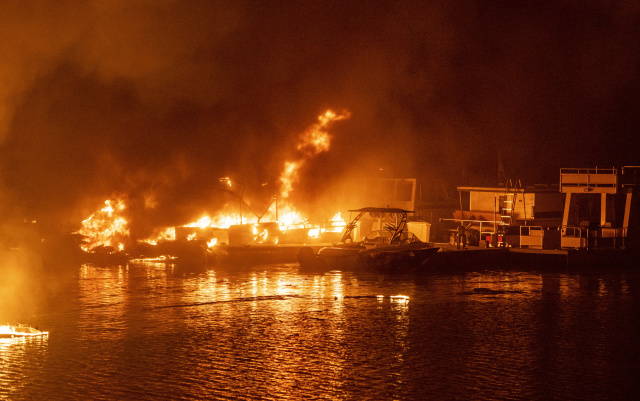 Docked boats burn on Lake Berryessa during the LNU Lightning Complex fire in Napa, California on August 19, 2020. Thousands of people fled their homes in northern California on August 19 as hundreds of fast-moving wildfires spread across the region, burning houses and leading to the death of a helicopter pilot. (JOSH EDELSON / AFP)

(AFP) - Some of California's largest-ever fires raged across the state Saturday, forcing tens of thousands from their homes as forecasters warned of further blazes sparked by lightning.

The total area burned for all the fires in California this week is "close to 1 million acres (400,000 hectares)," according to CalFire public information officer Jeremy Rahn.

"More lightning is anticipated tomorrow and into Tuesday -- everyone must remain alert and have an evacuation plan," the agency said on Twitter.

"The western US and Great Plains are shrouded under a vast area of smoke due to ongoing wildfires that extend from the Rockies to the West Coast."

The LNU fire covered 314,207 acres by Saturday morning, making it the second-largest fire in California history. It was 15 percent contained.

The SCU fire had burned 291,968 acres and was the third-largest fire in state history. It was 10 percent contained.

About 2,600 firefighters are tackling the two blazes, out of 13,700 battling "nearly two dozen major fires," according to Rahm.

"We simply haven't seen anything like this in many, many years," California Governor Gavin Newsom said on Friday.

Wineries in the famed Napa and Sonoma regions, which are still reeling from blazes in recent years, are under threat.

"Many of these firefighters have been on the lines for 72 hours, and everybody is running on fumes," Assemblyman Jim Wood of the Healdsburg district in Sonoma told the Los Angeles Times.

"Our first responders are working to the ragged edge of everything they have."

- Some refuse to evacuate -

Five deaths have been linked to the latest flare-ups, with four bodies recovered on Thursday, including three from a burned house in a rural area of Napa County.

But many residents have refused evacuation orders.

"At least if we're here, we know exactly what's going on," Napa resident John Newman, 68, told the San Francisco Chronicle as he sat in a lawn chair in his driveway. "Family is worried, but it's a little different if you're here firsthand."

Nature reserves were also ravaged. The Big Basin Redwoods State Park said that some of its historic buildings had been destroyed by flames.

The park, where giant redwood trees of well over 500 years old can be found, was "extensively damaged," it said.

About 119,000 people have been evacuated, with many struggling to find shelter and hesitating to go to centers set up by authorities because of coronavirus risks.

Some in counties south of San Francisco, evacuees opted to sleep in trailers along the Pacific Ocean as they fled nearby fires, while tourists were urged to leave to free up accommodation.

Fire crews, surveillance equipment and other firefighting hardware was being sent from states including Oregon, New Mexico and Texas.

But faced with the sheer scope of the disaster, Newsom also asked for help from Canada and Australia, which he said had "the world's best firefighters."

General » Be a reporter: Write and send your article » Subscribe for news alert
Tags: US, california