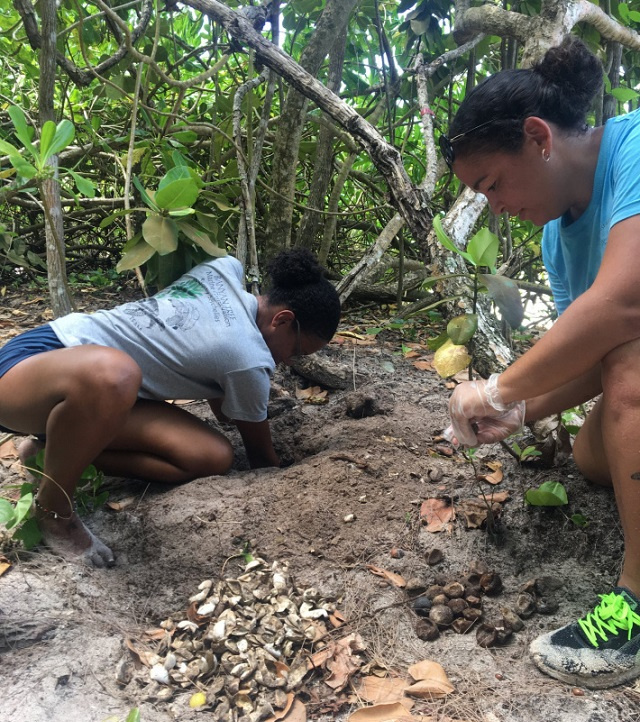 Seychelles’ Ministry for Environment, Energy and Climate Change has launched a volunteer programme where adolescents assist with its turtle monitoring activities.
The young volunteers will be trained and will assist the Biodiversity Conservation Section of the ministry as there is a lack of human resource to effectively monitor beaches, especially those used by nesting turtles - the hawksbill and the green turtles.
The program helps free up professional staff to monitor poaching, which has been on the rise.
“We have been doing it extremely well for the past years but the more people we have the more effective our monitoring will be, especially in terms of our response to poaching incidents,” Ashley Dias, director of the section told SNA last week.
Dias added that “we want to cover as many beaches as possible by having volunteers act as a deterrent to poachers.” According to Dias, the programme is targeting people ages 15 to 17 to collect as much data as possible during the nesting season.
With the volunteers involved in collecting information, conservation officers can focus more and increase patrols especially in the early morning and at night.
Young people can join the programme by filling an application form available at the Ministry’s headquarters at the Botanical Gardens, at Mont Fleuri. The volunteers will need to also get their parents to fill a consent form.
The monitorings are done in key nesting areas all over the three main islands. These include Anse Capucins, Bazarka, Intendence, Grand Police in the South of Mahe – the main island. Anse Kerlan, Anse Lablague, Anse Georgette and Anse Gouvernment on the second-most populated island of Praslin.
Conservation officers also monitor turtles on La Digue – the third-most populated island, and monitoring is done at Anse Severe, Anse Marron, Anse Koko and Petit Anse.
Ashley Pothin, conservation officer at the ministry said that monitoring is intensified during the peak season for breeding. “The breeding season for the green and hawksbill is from October all through to March, but the peak season is November, December and January,” Pothin added that the team works on a schedule and does the monitoring daily and at different times of the day.
With the volunteers on board, the ministry will be able to collect more information for its annual report. “We will keep a database of all the volunteers as we plan to run the programme annually. All data collected will enable the ministry’s to produce our final report but this time possibly with much more data,” explained Dias.
Dias added that “we hope that with an increased presence on the beaches, the number of poaching incidents will decrease compared to last year. The data will also be shared with our partner organizations who assist with the conservation of sea turtles.”
According to the environment ministry, there have been 15 confirmed cases of poaching this season. For the whole of last year, 14 cases were recorded while in 2018 there were only eight cases.
The director concluded that “the data is also crucial for our international reporting to several conventions Seychelles is a party to such as International Convention on the international trade in endangered species of wild flora and fauna and the Convention on Migratory Species.”
Species » Be a reporter: Write and send your article » Subscribe for news alert
Tags: Ministry for Environment, Energy and Climate Change

An island delicacy comes into season in Seychelles: bird eggs