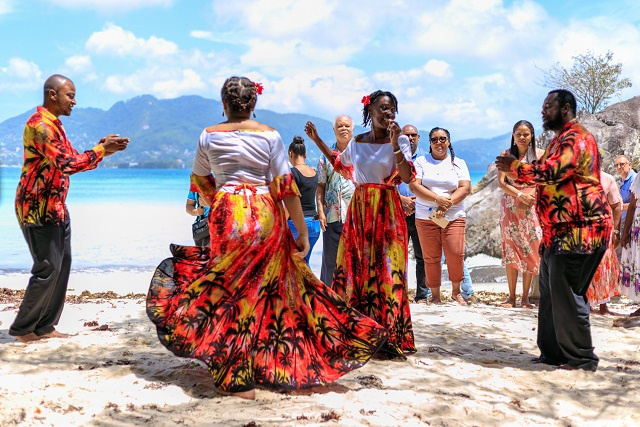 (Seychelles News Agency) - Exactly 250 years after the first settlers arrived in the island nation, Seychelles on Thursday commemorated the milestone by returning to the shores where the travelers first made landfall.

The group of 28 people - Europeans and slaves from India and Africa - established the first settlement on Seychelles’ inner island of Ste. Anne in 1770. The organising committee of the island nation’s anniversary kick-started a series of activities planned for the anniversary from the same island.

The first settlers were brought to Seychelles on board a ship - the Telemaque - which remains as the surname of some Seychellois families. The 15 French, seven Africans and five Indians were the foundation of a nation today populated by the Creole people, a melting pot of cultures.

“As Ste Anne is the place that this event took place, it was important that we at least carry out a small symbolic ceremony here to honour the date and the place. The event is historical and important,” said Sherin Francis, the chairperson of the 250 anniversary celebration committee.

During the short ceremony on the island, which is a 10-minute boat ride away from the main island of Mahé, there were poem recitals, the performance of the island nation’s traditional dance ‘kanmtole’, singing of traditional songs such as ‘romans’ as well as a patriotic song.

In his speech to mark the occasion, transmitted on the Seychelles Broadcasting Cooperation (SBC), President Danny Faure said that “even if 250 years is not a lot in world history, in our history, several significant events have taken place during the two and a half centuries.”

“Before becoming a sovereign state in 1976, Seychelles was a colony of France for over 40 years and that of the British for 162 years. Under both colonial rules, it was managed from Mauritius for 133 years. All of these has had a great influence on our country and us a nation,” said Faure.

“For us, the biggest thing that has happened since 1770 is the creation of the Seychellois nation – a nation with its identity, language and culture,” he added.

Following along the same line, Francis said that she “would like all Seychellois to be proud of our identity, to be proud of what we have achieved to this date.”

“This celebration should be taken as a time to reflect on the journey that we have undergone and look towards the future on how we can continue to have this unity as a small nation that has achieved a lot during this short period of time,” said Francis.

The official opening ceremony of the 250th anniversary of Seychelles was held at the Domaine de Vals De Pres, Au Cap on Mahe, later on during the day on a smaller scale than originally planned.

Many activities had been planned for this milestone in the history of Seychelles – 115 islands in the western Indian Ocean – but were cancelled or downsized due to the COVID-19 pandemic.

“There is a debate that we have prepared as well as a series of documentation, all of which will give the public the chance to appreciate this event. Later on during the year, we will have other activities, such as the launching of our book and the unveiling of a monument, which had to be postponed or were delayed due to the pandemic,” said Francis.

To mark the historical event, commemorative objects – such as maps, coins, and cups - are already on sale at the national museum. Commemorative stamps are expected to come out later on in the year.

“We also have other symbolic items that we will come forth with later on, such as a wooden boat that we want to place in the museum and it will symbolise 'Le Telemaque', the vessel that arrived for the first voyage,” said Francis.