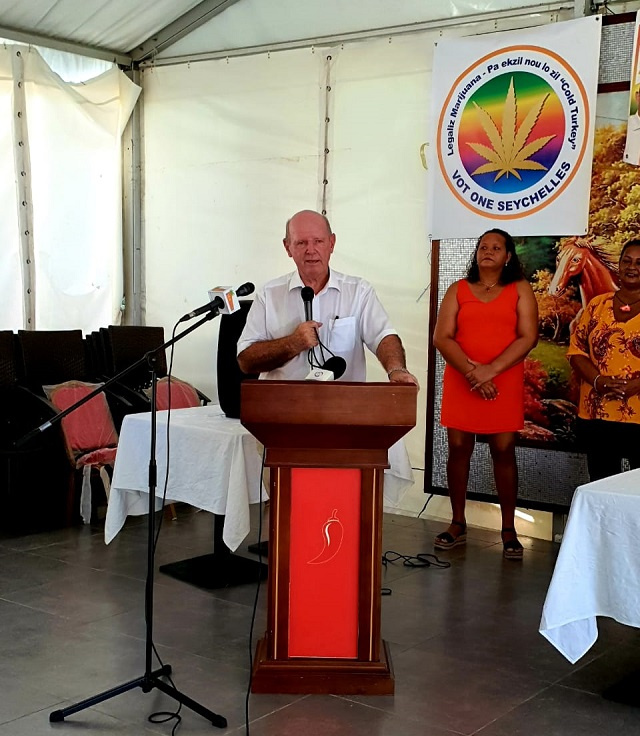 (Seychelles News Agency) - The One Seychelles political party has confirmed candidates for six more constituencies ahead of upcoming parliamentary elections to be held in the island nation in October.

Party leader Alain St Ange said that One Seychelles will stand alone in the presidential and legislative elections, ruling out a partnership with another party.

St Ange spoke Thursday as candidates for six more constituencies were presented, bringing the party’s total to nine, in a ceremony at the Chili Bar restaurant in the district of Les Mamelles.

In his address, the presidential candidate and leader of One Seychelles said that he is going to fill up candidates in every constituency.

“So far I have filled up candidates for nine districts. My message to them is to work hard if they happen to win their constituencies. You need to stay connected at all times as you will be here to represent the people and you will, therefore, need the voice of the people,” said St Ange.

The legislative election comprises 26 constituencies and candidates are chosen on a ‘first past the post’ basis. One week ago One Seychelles revealed its first candidates for the parliamentary elections and those were candidates for the second and third most populated islands of Praslin and La Digue.

At Thursday’s event, St Ange called for more respect between parties and condoned attacks being made on some of his candidates who are being threatened not to stand as a legislative candidate.

“Seychelles is for all its children. We need to maintain a fair and participatory election. Anyone who feels that they have the capacity can put their name forward as a candidate. As of today, we are going to make official declarations if these threats persist,” said, St Ange.

On his part, the secretary-general of the party, Peter Sinon, reiterated the need for the chosen candidates to stay connected with their constituencies and people.

“Your employers are having the chance every five years to choose a representative to speak for them in parliament. These employers are people in your districts. Therefore, we need to always render our services to the people,” said Sinon.

St Ange said he would address poverty as a priority if elected, as financial difficulties will increase due to the economic impact of COVID-19.

“Those that are in power have not brought any tangible solutions to help our Seychellois to deal with the impact of COVID-19. We need to come up with solutions to prevent people from losing their jobs,” said St Ange.

“We need to look at the devaluation of the rupee against foreign currencies. No one has taken heed that due to the devaluation the minimum salary that is SCR5000 ($280) is now worth SCR4000 ($222). We need to fix the minimum wage so that our people do not fall into dire poverty,” said St Ange.

Politics » Be a reporter: Write and send your article » Subscribe for news alert
Tags: St Ange, COVID-19, One Seychelles