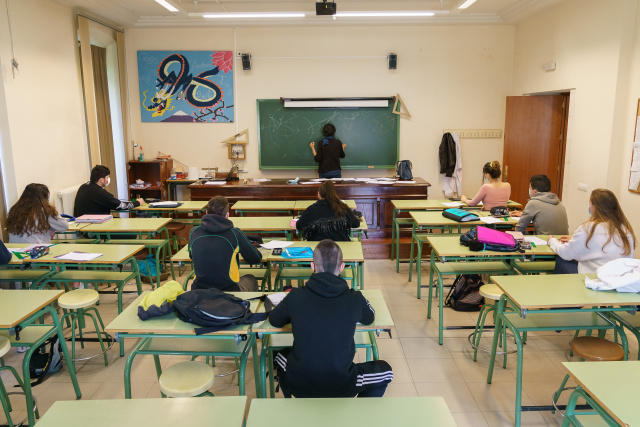 (FILES) In this file photo taken on June 18, 2020 students wearing face masks attend class at the Lopez de Mendoza Institute in Burgos after the reopening of schools in the community of Castilla y Leon. European nations are pushing ahead with reopening primary schools despite a rise in coronavirus cases, with smaller classes, shorter lessons and mask-wearing among the steps adopted to curb infections. But many parents and teachers worry the measures are not enough, or have been adopted too close to the start of classes to be put in place properly, leading some parents to decide to keep their children at home. (CESAR MANSO / AFP)

(AFP) - European nations are pushing ahead with reopening primary schools despite a rise in coronavirus cases, with smaller classes, shorter lessons and mask-wearing among the steps adopted to curb infections.

But many parents and teachers worry the measures are not enough, or have been adopted too close to the start of classes to be put in place properly, leading some parents to decide to keep their children at home.

David Rodrigo, a 41-year-old IT specialist from the western Spanish city of Salamanca, said he would not send his two sons aged seven and nine to their school when it re-opens next month because he fears it won't be safe.

While children in general face less severe virus symptoms than do adults, they can infect older family members who live in the same household who are "very, very vulnerable," said Rodrigo, the spokesman of a parents group representing some 60 area families that share his concerns.

"It's a time bomb," he said, adding children will respect social distancing rules for "the first ten seconds".

His group is one of several in Spain, which has one of the fastest virus growth rates in Europe, that wants the government to make it possible for pupils to attend classes remotely until a vaccine or treatment for Covid-19 is found.

But the Spanish government insists children, who have not seen a classroom since March when online learning replace in-person teaching due to the pandemic, must attend classes when schools re-open in September.

It announced Thursday that all children above the age of six will be required to wear masks at all times while in school.

Italy, Europe's first virus hot spot, requires masks for children over six only when they can't respect social distance while Greece has made it mandatory for all students.

The importance of using masks in school during a pandemic is "as obvious as is the use of a seat belt in a car or the need to vaccinate your children," Greek Education Minister Niki Kerameus said.

Some countries have also reduced class sizes to ensure children keep a safe distance from each other.

In Greece, which has avoided the worst of the pandemic so far, classes can have no more than 17 students while Serbia and Bosnia have set the limit at 15.

In Spain the Madrid region announced Tuesday that it would hire nearly 11,000 more teachers and set up makeshift classrooms in schoolyards to bring class sizes in primary schools down to 20.

But Mercedes Sardina, a teacher's representative with the CCOO union in Fuenlabrada on Madrid's southern outskirts, said she doubted this would be possible, likening it to trying to stage a wedding in three days "when you have done nothing. You haven't even bought your dress."

"Teachers are very frightened. And the students and parents too," she added.

Spain's student union has called a strike on September 16, 17 and 18 to decry funding shortages and reject the "improvisation" of the start of the school year.

While Ana da Silva, a 42-year-old language teacher in Fuenlabrada, said she was also not sure Madrid could reduce class sizes as promised, she was keen to return to in-person schooling.

"I need to see my students, connect with them. We know their dreams, their joys, their frustrations," she said.

Italy has ordered 2.4 million individual desks but delivery is expected to last until October, after classes have already begun.

Greece will give all primary school children their own reusable water flask so they can avoid using water fountains where the virus may linger.

Britain's chief medical officer Chris Whitty has sought to calm jitters, telling the BBC earlier this month that it looked as if "there is much less transmission from children to adults than adults to adults".

But Germany may serve as a cautionary tale. Officials closed two schools in the north of the country in early August after several cases of Covid-19 were detected in staff and students just days after classes resumed.