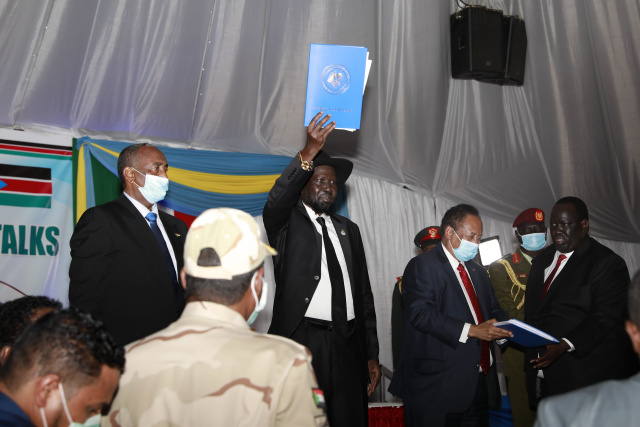 South Sudan President Salva Kiir (C) holds up the document of the signing between the rebel groups and the government during the singing of the Sudan peace deal with the rebel groups in Juba, South Sudan, on August 31, 2020. Sudanese leaders and rebel commanders agreed on August 31, 2020, on a "historic" peace deal, a crucial step towards ending 17 years of conflict in which hundreds of thousands of people were killed. (Akuot Chol / AFP)

(AFP) - Sudanese leaders and rebel commanders agreed Monday on a "historic" peace deal, a crucial step towards ending 17 years of conflict in which hundreds of thousands of people were killed.

Leaders of the Sudan Revolutionary Front (SRF), an umbrella organisation of rebel groups from the western region of Darfur and the southern states of South Kordofan and Blue Nile, raised their fists in celebration after inking the agreement.

Fighting in Darfur alone left around 300,000 people dead after rebels took up arms in the vast western region In 2003, according to the United Nations, with former government leaders accused of carrying out genocide and crimes against humanity.

Conflict in South Kordofan and Blue Nile erupted in 2011, in the wake of South Sudan's independence, resuming a war that had raged from 1983-2005.

"This is a truly historic day," Prime Minister Abdalla Hamdok said as he called on holdout rebel groups to join the deal he said would build "peace and stability" in Sudan.

"We are waiting for them," Hamdok said.

Gibril Ibrahim, commander of one of the rebel groups, the Justice and Equality Movement (JEM), paid tribute to all those killed or affected by the long years of violence.

"I congratulate all in Sudan on reaching a historic, comprehensive peace that addressed the roots of the problem and ended the war, God willing," Ibrahim said.

Sudanese paramilitary commander Mohamed Hamdan Daglo -- best known by his nickname "Hemeti", and who commanded fighters in the war -- signed the deal on behalf of Khartoum.

Daglo and the leaders of the rebel movements grouped together and shook hands at the ceremony in Juba, the capital of neighbouring South Sudan which seceded from the north in 2011.

Then the former enemies briefly danced together.

South Sudanese President Salva Kiir -- a former comrade to some of the rebels during Sudan's earlier civil war -- hosted and mediated the talks.

Officials said the deal was "initialled" and not signed, as a way to leave the door open for two key holdout rebel groups to join in a "final" agreement.

But amid the celebrations and various messages of support, including from the UN, the Western Troika, EU, Arab League, Saudi Arabia and Qatar, were warnings that there was still a long way to go.

The Sudan Troika made up of the United States, Britain and Norway said the accord "lays a foundation for sustainable peace and stability in Darfur and other conflict-affected areas that is critical for Sudan’s democratic transition".

But the deal "must be followed up with local peace and reconciliation efforts in the conflict-affected areas", it added.

The European Union's diplomatic chief Josep Borrell said the deal "signifies an important milestone for the ongoing democratic and economic transition of Sudan".

"The EU remains committed to supporting the historic Sudanese transition."

Jonas Horner, from the International Crisis Group think-tank, called the agreement a "milestone" but said that implementation would be tough.

"It is a hugely significant sign of progress for Sudan's transition," Horner said.

"But it... only represents a first step towards peace, while significant hurdles remain in the way of its implementation."

Sudan's Information Minister Faisal Mohammed Salih said: "We know that we are going to face some problems when we start to move this (deal) from paper to the ground... but we have that political will."

Rebels fought troops deployed by now-toppled autocrat Omar al-Bashir, who is wanted by the International Criminal Court (ICC) over charges of genocide and crimes against humanity in the Darfur conflict.

Bashir, who is in jail in Khartoum convicted of corruption, is now on trial for the 1989 coup in which he grabbed power.

Sudan's transitional authorities in February agreed Bashir should stand trial before the ICC.

Forging peace with rebels has been a cornerstone of Sudan's transitional government, which came to power in the months after the overthrow of Bashir in April 2019.

Sudan's rebels are largely drawn from non-Arab minority groups that long railed against Arab domination of the government in Khartoum under Bashir.

The agreement covers key issues around security, land ownership, transitional justice, power sharing, and the return of people who fled their homes because of fighting.

It also provides for the dismantling of rebel forces and the integration of their fighters into the national army.

However, an SLM faction led by Abdelwahid Nour and a wing of the SPLM-N headed by Abdelaziz al-Hilu refused to take part.

Malik Agar, rebel chief of the SPLM-N faction that agreed to the deal, called on his comrades still fighting to lay down their arms.

"I announce from this platform the end of the war," Agar said in a speech, calling on Nour and Hilu to "not miss this historic opportunity".