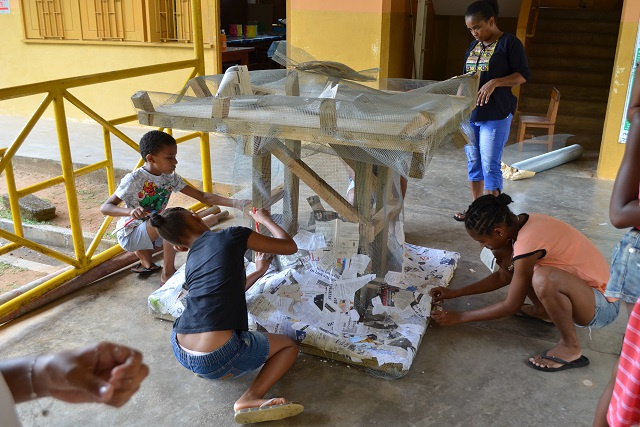 The students are creating sculptures as well as a song as part of a regional project - Pareo - to highlight the rich heritage of coral reefs and children as their custodian. (Pareo)

(Seychelles News Agency) - School children from three primary schools in Seychelles are creating artwork to be used to sensitise and raise more awareness about reef protection and conservation.

The students are creating sculptures as well as a song as part of a regional project - Pareo - to highlight the rich heritage of coral reefs and children as their custodian. It is currently being implemented in three Indian Ocean islands – Seychelles, Mauritius and Reunion, which is a French department.

The three state schools across the main island of Mahe -- Beauvallon, Takamaka, and Port Glaud Primary Schools -- used the school holiday the last two weeks of August to work on their projects.

Beauvallon Primary School in the north of Mahe is working on a sculpture revolving around a traditional boat known as the “pirogue”. The boat made of wood will be the centrepiece and it will be surrounded by a reef designed with recycled materials.

According to teacher Vanessa Songor, “the boat will be sculpted in a way to create the impression that it is sinking partially and where the other half of the boat is afloat. The idea is to show that this the traditional way of fishing was a sustainable practice in Seychelles but it is now a dying tradition that is lost through modernization and introduction of motorized boats.”

Similarly, Takamaka Primary School is also creating an artwork in the form of sculpture showcasing a healthy reef and the other part will reflect an unhealthy reef. “In order words, the Takamaka School’s project is showcasing a bleached reef that will mirror a healthy reef, this is, therefore, raising the awareness on the issue of climate change,” explained Decommarmond.

Both schools are in districts known for having beautiful beaches. Beauvallon beach is one of the most frequented beaches by visitors on the main island whilst Takamaka down in the south of Mahe is home to some of the most pristine beaches such as Grand Police and Anse Bazarka.

Once completed both artworks are expected to be displayed in public spaces to raise awareness on the importance of reef protection and conservation. Students from the primary schools SNA spoke to are very aware of the need to protect coral reefs which sustains the livelihood of the islanders.

“Corals act like houses for fish, and we depend on the fish to live so we must protect the coral reefs,” Meryl Thomas from Takamaka said. Whilst Anile Lozaique from Beauvallon added that corals make the island nation’ ocean life much more beautiful. “Corals are an attraction to visitors so we must protect them.”

In the western district of Port Glaud, the students are combining music and conservation, and working on a song. The group have started to put words together and interestingly all the ideas for the song are coming from the students themselves. The next thing will be to put the words together with a catchy islands’ style rhythm for the song.

The end product will be singing praises to the reef, as a rich biodiversity-and ecosystem, worth protecting. Issues like pollution will also be highlighted. In the end, the song is expected to be recorded and filmed as a video clip.

All artworks are expected to be completed by the end of September. According to Lola Massé, Pareo’s project manager, similar art projects are going on in Reunion and in a few months in Mauritius. “Once done, the children will show their artworks to those of the other islands through photos or even a little video,” said Massé.

Pareo launched in Seychelles – 115 islands in the western Indian Ocean - in March this year is implemented by the “Research Institute for Development (IRD),” and funded by Europe, France and the Regional Council of Reunion. It seeks to raise awareness about the coral reefs of the Indian Ocean region.

Arts & Culture » Be a reporter: Write and send your article » Subscribe for news alert
Tags: Pareo, Research Institute for Development