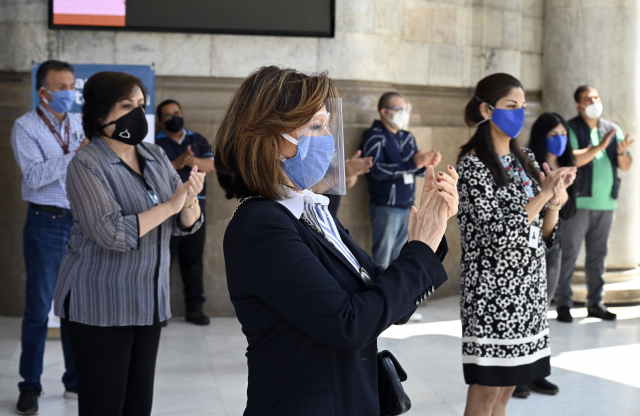 Workers of the Fine Arts Palace applaud for a minute at noon in memory of the more than 60,000 people killed by the COVID-19 in Mexico City, on September 2, 2020. The novel coronavirus has killed at least 857,824 people worldwide since the outbreak last December, according to a tally from official sources compiled by AFP, with Mexico being one of the hardest-hit countries with 65,241 deaths from 606,036 cases.(ALFREDO ESTRELLA / AFP

(AFP) - At least 7,000 health workers worldwide have died after being infected with the coronavirus, including more than 1,300 in Mexico alone, the most for any country, Amnesty International said Thursday.

"Every health worker has the right to be safe at work, and it is a scandal that so many are paying the ultimate price," said Steve Cockburn, head of economic and social justice at the London-based rights group.

"Many months into the pandemic, health workers are still dying at horrific rates in countries such as Mexico, Brazil and the USA, while the rapid spread of infections in South Africa and India show the need for all states to take action."

At least 1,320 health workers are confirmed to have died from Covid-19 in Mexico, a "staggering" cost of human life, Amnesty said.

Other hard-hit countries include the United States with 1,077 deaths among health workers, the United Kingdom with 649, Brazil with 634, Russia with 631 and India with 573.

Even these figures are likely to be "a significant underestimate," as deaths may not have been officially registered in many countries, Amnesty said.

Mexico, which has one of the world's highest overall fatality tolls from the coronavirus, has kept a detailed record of health worker deaths which may partly explain its high figure, Amnesty said.

The Latin American nation has reported 97,632 confirmed cases of Covid-19 among health workers, among a total of more than 610,000.

"There have been reports that hospital cleaners in Mexico are especially vulnerable to infection," Amnesty said, noting that outsourcing means such workers have less protection.

The Mexican government has recognized that the health system has suffered from decades of neglect but says it is working to improve standards.

The country of 128.8 million has officially registered more than 65,000 deaths from the coronavirus, out of a total of more than 860,000 worldwide.

"Throughout the pandemic governments have hailed health workers as heroes, but this rings hollow when so many workers are dying from a lack of basic protection," Cockburn said.