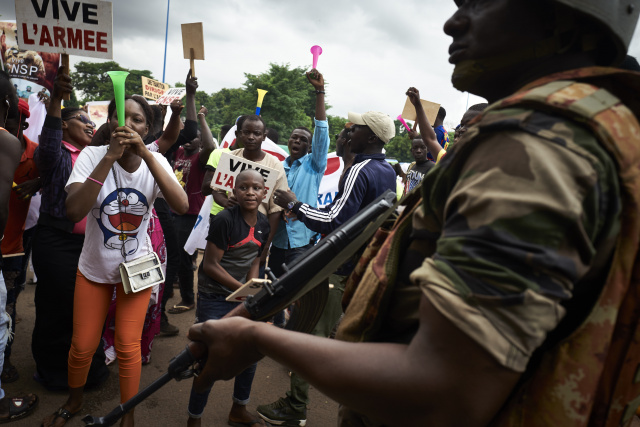 Supporters of the CNSP (National Committee for the Salvation of the People) celebrate during a gathering at the start of two days of talks aimed at validating the terms of reference for a transitional government in Mali, on September 5, 2020, in Bamako. Mali's military junta began talks with opposition groups on September 5 on its promised transition to civilian rule after mounting pressure from neighbours to yield power in the weeks since it overthrew the nation's leader. The West African country has long been plagued by chronic instability, a simmering jihadist revolt, ethnic violence and endemic corruption, prompting a clique of rebel colonels to detain the president last month.(MICHELE CATTANI / AFP)

(AFP) - Mali's army, which staged last month's coup in the war-torn nation, is taking on a role in politics despite being hamstrung by a crippling lack of resources.

The August 18 putsch came after months of protests against ousted leader Ibrahim Boubacar Keita and sent shockwaves across a region beset by jihadist attacks and grinding poverty.

The country's neighbours, and its ally and former colonial ruler France, called for a swift transfer of power over fears of even more instability as Mali grapples with an Islamist insurgency, ethnic violence and economic malaise.

Its fourth coup in 60 years as an independent nation came with the army intervening to seize control of a situation that was becoming increasingly unmanageable.

Junta leader Colonel Assimi Goita is a taciturn man whose statements have been brief and not revealed much.

The 37-year-old son of a former military police official served in the main cities of the sprawling country's volatile north which has been ravaged by insurgency since 2012.

He rose rapidly through the ranks and headed an elite unit. He also underwent training in Germany, Gabon and the United States and is a highly competent military man.

"He is a young man who is very hands-on but not loquacious," said Kissima Gakou, a former strategic adviser to the defence ministry for 12 years.

However, the 13,000-strong military is fighting an uphill battle against the insurgency and jihadist attacks that have claimed thousands of lives.

A soldier from an elite unit, speaking to AFP on condition of anonymity, recalled a deadly ambush in the country's centre in September which killed four of his comrades when armed men on motorbikes attacked their convoy.

"After that I wanted to quit the army," he said. "But I'm still here, because there is no work. What else can I do?"

The force has the Herculean task of securing an area two-and-a-half times the size of France from different groups allied to al-Qaeda or the Islamic State and various militia groups, some fighting for the government and others against.

Troop rotations are not fixed and soldiers can remain on hostile terrain in barracks susceptible to attacks for up to nine months at a stretch.

"The state of the army is catastrophic," said former security adviser Gakou.

"Can you imagine that the defence minister while visiting at the end of 2019 learnt that the soldiers did not have water in the camp?"

France and the European Union have spent millions of dollars to train and equip the Malian forces with special units, fighter jets and armoured vehicles.

But it is increasingly clear that the army is not up to the task without the backing of foreign allies such as France, which has deployed more 5,000 soldiers in West Africa in an anti-jihadist operation.

France announced that two of its soldiers had been killed Saturday, and a third wounded, when an improvised explosive device went off under their armoured vehicle in northern Mali.

The Malian army has also been blighted by repeated accusations of killing and looting civilians in the guise of anti-terrorist operations.

Corruption is a huge problem. Junior soldiers accuse officers of stealing money "to swagger in the drawing rooms of Bamako", as one put it.

After Mali's first coup in 1968, which ended decades of dictatorship, "the army entered the field of politics", and remained there, said Mody Berethe, who heads a body training African officers based in Bamako.

The links are deep-rooted and intertwined, he said. The son of ousted president Keita for instance headed a parliamentary defence commission and embodied the endemic corruption that ordinary Malians had been railing about for months.

Defence spending scandals have plagued Mali for years -- funds spirited away, inflated bills and the acquisition of helicopters that never took off.

In 2014, a report on soldiers kits found socks being sold for 35 euros a pair when the average salary of a soldier was two euros a day.

The coup leaders have promised to build a "New Mali" and hand over power to civilians.

But the army also has to change, Berethe said.

Africa » Be a reporter: Write and send your article » Subscribe for news alert
Tags: Mali