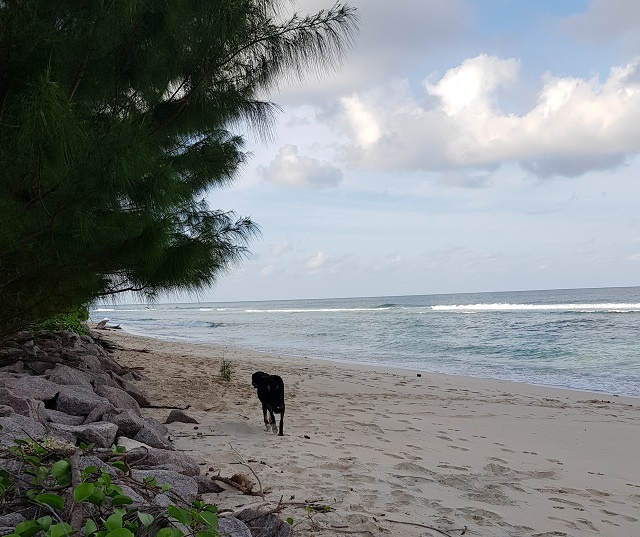 A shoreline management plan is being finalised for the North East Point coastline to transform it into an area resilient to the effects of climate change and other man-made stressors. (Betymie Bonnelame, Seychelles News Agency)

(Seychelles News Agency) - Dunes and beach berms will be rehabilitated and new vegetation will be planted on the shoreline of the northern part of Seychelles' main island, Mahé, to tackle the effects of climate change.

A shoreline management plan is being finalised for the North East Point coastline to transform it into an area resilient to the effects of climate change and other man-made stressors.

The plan applies to the coastal zone below the 10-metre flood line to the outer edge of the near-shore fringing reef system and between the southern and northern reach of the North East Point beach.

Stretching from the wetlands after the ‘Kreolfleurage Parfums’ up to the Rehabilitation Centre, the area is greatly affected by coastal flooding and seasonal and chronic erosion. The area undergoes some man-made stress - removal of sand from the beach, clearing of beach vegetation, and parking on dunes – adding to the devastating effects.

Work in the area is being carried out under the Ecosystem-Based Adaptation (EBA) project being implemented by the government of Seychelles, Global Environment Facility and the United Nations Development Programme’ Programme Coordination Unit.

EBA is often referred to as the ‘natural solution to climate change’. The project started in 2014 and is expected to end in October 2021.

The project manager, Betty Victor, told SNA last week that rehabilitation has started with the wetland where, last year, around 250 native trees were planted along a large marsh that was previously polluted.

“We are not really looking into doing rock armouring, though this might be something that the government does in the future. We are looking at soft engineering approaches such as the rehabilitation of sand dunes and beach berms, and the planting of vegetations along the coast. We are also looking at things such as ensuring there are parking areas for people to use, which will, in turn, ensure that they do not crush dunes on the beach,” explained Victor.

The plan outlines that rehabilitating dunes will ensure that the natural structures act as a protective barrier against wave action, hence stabilising the beach.

“Our challenges are less related to people but more in terms of the existing infrastructures. At North East Point, most of the infrastructures are along the coast and they are constantly threatened by the effects of climate,” said Victor.

Consultative sessions have been held with different stakeholders, including the environment ministry, Seychelles Land Transport Authority, the district administration office, the office of the member in the National Assembly, the North East Point hospital, residents of the area as well as the school. The plan was up for public inspection during the last week of August.

Victor said that “the aim was to have an integrated plan, come up with strategies that have been proposed by all the affected parties.

“It will depend on the governmental stakeholders as well as the public to ensure that the implementation of the plan is successful. When the project ends in October 2021, we do not want things to just end. All this is being done to help the community adapt to climate change and everyone needs to play their role and hence have to step up and do their part to make the plan a success,” said Victor.