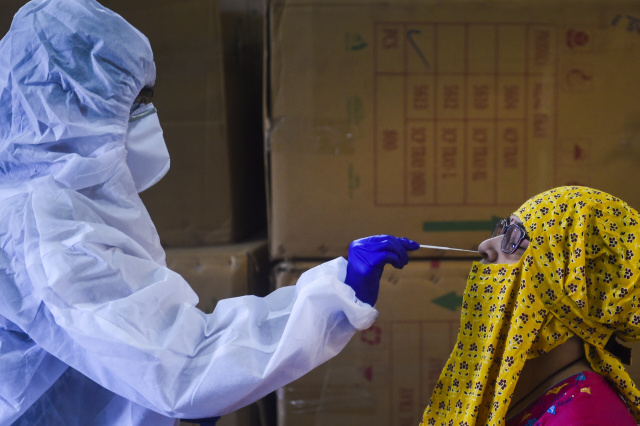 India overtook Brazil on Monday as the country with the second highest number of confirmed coronavirus cases, even as key metro train lines re-opened as part of efforts to boost the South Asian nation's battered economy. (AFP)

(AFP) - India overtook Brazil on Monday as the country with the second highest number of confirmed coronavirus cases, even as key metro train lines re-opened as part of efforts to boost the South Asian nation's battered economy.

India has emerged in recent weeks as the new global pandemic hotspot, although cases continue to soar across the globe with reported infections worldwide nearing 27 million and deaths surpassing 880,000.

France, Israel and Australia were among the nations forced in recent days to extend travel restrictions or impose new ones to try and contain fresh surges.

India, home to some of the world's most densely populated cities, has been reporting the highest single-day rises in the world and on Monday it confirmed a new record of nearly 91,000 new cases.

Infections have now risen above 4.2 million, surpassing Brazil's total and making India's tally the second-highest behind the United States' 6.25 million.

The metro in the capital New Delhi began reopening on Monday after a five-month shutdown and 12 other cities restarted subway services.

"For our lives to move on, we have to get out of our homes... so this is a good move by the government," passenger Deepak Kumar, who took the Delhi subway to work, told AFP.

During peak hour in New Delhi on Monday morning, carriages were sparsely filled as people followed guidelines dictating that only alternate seats could be occupied.

Britain, one of the worst-hit countries at the start of the pandemic, is also battling another spike.

The number of daily cases hit nearly 3,000 on Sunday, a level not seen since late May, according to health ministry figures.

"It's important that people don’t allow this illness to infect their grandparents and to lead to the sort of problems that we saw earlier in the year," he said.

The British government said it would tighten local restrictions in areas showing sharp rises in cases, rather than impose a second national lockdown, for fear of its impacts on the economy.

The curbs came after France reported a record of nearly 9,000 daily cases on Friday. In Paris masks are now mandatory in all public spaces.

Lockdowns have also been imposed or extended in Israel and Australia in recent days.

Israel decided Sunday to begin "a nightly closure" of 40 cities and towns with the highest infection rates.

"I know these limitations are not easy, but in the current situation, there's no way to avoid them," Netanyahu said.

According to data collected by AFP, Israel has risen to fifth in the world for the number of infections per capita, ahead of Brazil and the United States.

In Spain, the government is trying to restart schools even as it records the highest number of new infections on the European continent.

Some Spanish parents are refusing to send their children back to class for the new school year despite the threat of sanctions from authorities.

"Going back to school is being treated like an experiment, we're like guinea pigs," said Aroa Miranda, a 37-year-old mother-of-two in the coastal town of Castellon de la Plana.

"For my eight-year-old, I will pretend he's ill so I don't have to send him to school."

On the sporting front, International Olympic Committee vice president John Coates offered a stoic note of hope, saying the Tokyo Games would go ahead next year regardless of the pandemic.

"These will be the Games that conquered Covid, the light at the end of the tunnel," Coates told AFP in an exclusive interview.