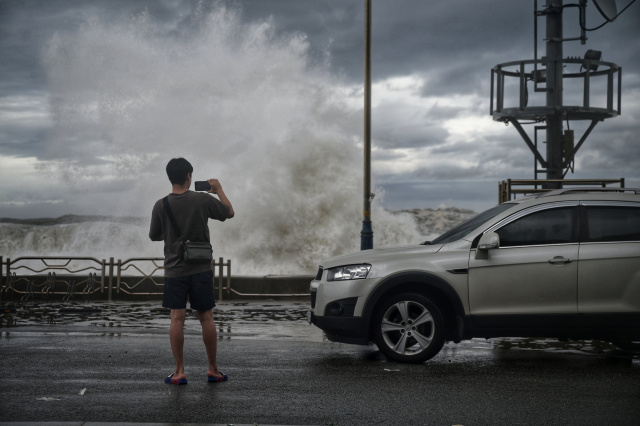 A man takes a photo before a sea wall of waves brought by Typhoon Haishen in the eastern port city of Sokcho on September 7, 2020. The powerful typhoon lashed South Korea on September 7 after smashing into southern Japan with record winds and heavy rains that left four people missing in a landslide.(Ed JONES / AFP)

(AFP) - A powerful typhoon lashed South Korea on Monday after smashing into southern Japan with record winds and heavy rains that left up to eight people dead or missing.

More than 300,000 households were still without power Monday afternoon after Typhoon Haishen roared past Japan's southern island of Kyushu, ripping off roofs and dumping half a metre (20 inches) of water in just a day.

Rescue workers were picking through mud and detritus seeking four missing people after a landslide in rural Miyazaki.

Dozens of police officers were on their way to help, Chief Cabinet Secretary Yoshihide Suga told reporters in Tokyo.

At least one person had been killed by the typhoon, he said, with the causes of another three deaths during the storm not immediately known.

Haishen, which came on the heels of another powerful typhoon, crashed into Okinawa on Saturday and moved northwards throughout Sunday.

Around 1.8 million people were told to seek shelter for fear that the 200-kilometre-per-hour (135-mile-per-hour) winds would wreak havoc on Japan's wooden housing stock.

By lunchtime on Monday, the storm had moved over South Korea, forcing the cancellation of hundreds of flights and triggering landslides.

Traffic lights and trees were felled in and around Busan, streets were flooded and power was knocked out for around 20,000 homes across the country.

The typhoon cut electricity to Hyundai Motor's assembly lines in the city of Ulsan, bringing production to a halt for several hours.

Haishen churned its way up the eastern side of the peninsula into the Sea of Japan, known as the East Sea in Korea, having lost some of its destructive force, but still packing winds of up to 112 kilometres per hour.

The streets of the port city of Sokcho were largely empty, but some residents braved the rain and wind to take photos and marvel at the swell crashing into the harbour wall.

Outside the city, swollen rivers surged through the countryside carrying debris and the occasional fallen tree.

Haishen was forecast to make landfall again in Chongjin, North Hamgyong province in North Korea, at around midnight, according to South Korea's Meteorological Administration.

Pyongyang's state media have been on high alert, carrying live broadcasts of the situation, with one showing a reporter driving through a windy, inundated street in Tongchon, Kangwon province.

"Now is the time when we must be on our highest alert," he said, adding that winds were as powerful as 126 kilometres per hour.

North Korea is still reeling from the effects of Typhoon Maysak last week.

He ordered 12,000 ruling party members in Pyongyang to help with recovery efforts, and the official KCNA news agency reported Monday that around 300,000 had responded to his call.

The North's state media have yet to specify how many people Maysak left missing, injured or dead.

In Japan, Typhoon Haishen first made its presence felt on a string of exposed, remote southern islands before sweeping past the Kyushu region.

As it approached Kyushu authorities issued evacuation orders for 1.8 million people, with 5.6 million others told to take precautions.

In some places, residents checked into hotels to shelter from the storm.

Japan converts its municipal buildings and schools into shelters during emergencies, but some people were reluctant to gather in large numbers due to fears over the Covid-19 pandemic.

"I am worried about coronavirus infections. We're with small children too, so we did not want other people to see us as big trouble," an elderly man in Shibushi city told broadcaster NHK after checking in at a local hotel with seven relatives.

The storm forced the cancellation of nearly 550 flights and disrupted train services, the network said.