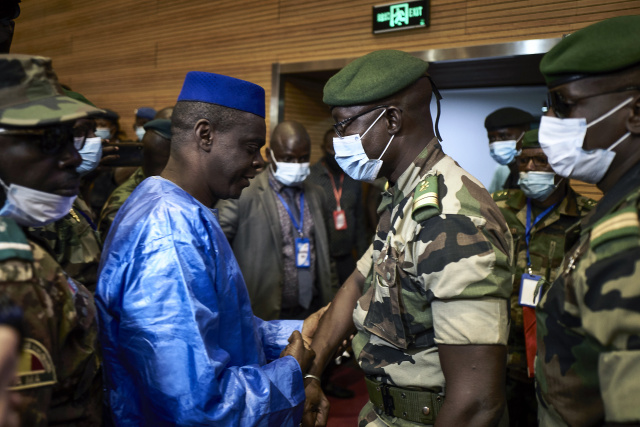 Vice-President of the CNSP (National Committee for the Salvation of the People) Colonel Malick Diaw (R) shakes hands with Issa Kaou Djim, a leading figure in the June 5 Movement, during a ceremony to open two days of talks aimed at validating the terms of reference for a transitional government in Mali, on September 5, 2020, in Bamako. Mali's military junta began talks with opposition groups on September 5 on its promised transition to civilian rule after mounting pressure from neighbours to yield power in the weeks since it overthrew the nation's leader. The West African country has long been plagued by chronic instability, a simmering jihadist revolt, ethnic violence and endemic corruption, prompting a clique of rebel colonels to detain the president last month.(MICHELE CATTANI / AFP)

(AFP) - The West African regional bloc ECOWAS on Monday called on Mali's military junta, which seized power last month, to appoint a civilian to head a transition government by September 15.

The 15-nation Economic Community of West African States slapped sanctions on Mali after the August 18 coup, including closing borders and banning trade, and has called for elections within 12 months.

The junta has proposed a years-long, military-led transition back to civilian rule, but ECOWAS Commission chief Jean-Claude Kassi Brou has insisted it be led by a civilian president and prime minister for a 12-month period.

In the final statement of an ECOWAS summit in Niger's capital Niamey on Monday, Brou said Mali's civilian transition president and premier "must be appointed no later than September 15".

In the meantime, ECOWAS would keep its sanctions in place, while tracking the consultations between the junta and Malian factions, he added.

ECOWAS had earlier issued a fresh call for a "swift" transition to civilian rule.

"It is our community's duty to help Malians towards the swift re-establishment of all democratic institutions. The military junta must help us to help Mali," ECOWAS' outgoing chairman, Niger's President Mahamadou Issoufou, said at the start of a summit.

"Other strategic partners of the Malian people have the same hope," he said.

During an extraordinary ECOWAS summit on Mali last week, Issoufou had indicated that the sanctions would be "lifted gradually depending on the implementation" of measures allowing a return to civilian rule.

Within hours of taking control, the military junta pledged to enact a political transition and stage elections within a "reasonable time".

The junta held talks over the weekend with opposition groups on its promise to hand power back to civilians, after mounting pressure from neighbouring countries over fears of even more instability in the war-torn nation.

Originally the junta proposed a three-year military transition to civilian rule, before bringing that down to two years.

An opposition coalition of civil and religious leaders which spearheaded months of protests that led up to Keita's fall has said it wants a transition period of 18 to 24 months.

The June 5 Movement has also demanded that the junta give it a role in the transition.

Meanwhile Keita, who suffered a mini-stroke last week, flew out of Mali late on Saturday for treatment in the United Arab Emirates.

The junta said Keita must return to Mali within three months, a time limit it said it had agreed with ECOWAS.

Keita was ousted two years into his second five-year term in Mali's fourth coup in 60 years as an independent nation.

Africa » Be a reporter: Write and send your article » Subscribe for news alert
Tags: Mali, ECOWAS