Seychelles' register of voters to be certified on September 15, commission says 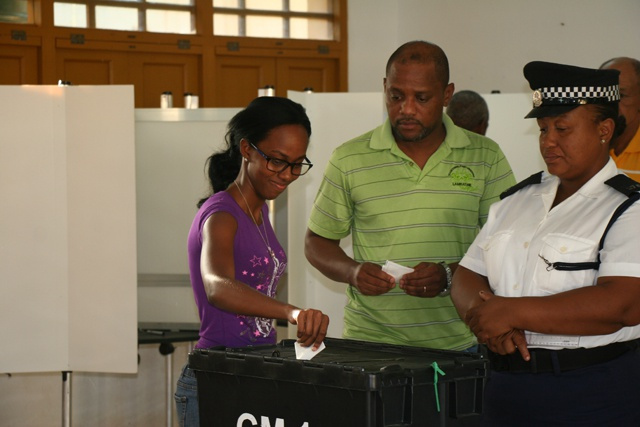 (Archives) Voting in the second round of the presidential election in Seychelles in 2015. (Rassin Vannier, Seychelles News Agency)

(Seychelles News Agency) - The Seychelles' Electoral Commission says the register of voters will be certified on September 15, and that list will be used in the presidential and legislative elections in October.

The chief electoral commissioner, Manuella Amesbury, told a press conference that the Commission is getting complaints that some newly registered voters are not seeing their names on the register while texting 9600 on their phones.

"This is because we are still compiling the register, which we intend to certify on September 15," she said.

Around 70,000 people are eligible to vote in Seychelles, an archipelago in the western Indian Ocean.

On the outer islands, Amesbury said that everything is set and information is being collected from hotels to see the number of people they have that are eligible to vote.

Presidential and National Assembly elections in Seychelles will take place simultaneously from October 22-24. The voters' registration was closed once the election dates were confirmed on August 11.

With regards to logistics, Amesbury said that the Commission has already finalised its list of voting stations and special stations and as is usually the case that will be mostly in public schools.

"We have met with the Ministry of Education and we are working with them to ensure that the facilities that are being allocated are up to standard and to renovate where deemed necessary," said Amesbury.

To ensure that presiding election officers are well prepared, the Commission will be conducting a simulation exercise.

While the opposition coalition -- Linyon Demokratik Seselwa (LDS) -- won a majority of votes including 15 out of the 25 constituencies contested in the legislative election in September 2016.