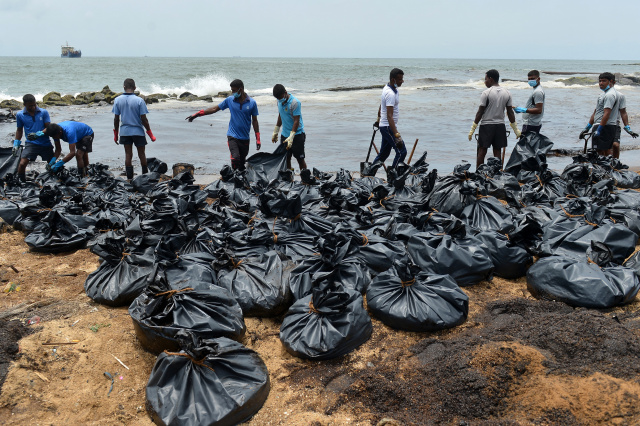 Sri Lankan soldiers work to remove oil from a pipeline leak from the beach at Uswetakeiyawa, a coastal town north of Colombo, on September 10, 2018. The spill that started on September 8 was caused by a pipeline leak, officials said, and the oil flow was confined to a approximately 5km stretch of coastline before the leak was halted. (LAKRUWAN WANNIARACHCHI / AFP)

(AFP) - A blaze on a stricken oil tanker off Sri Lanka was finally extinguished Wednesday, authorities said, but while no crude has escaped the cargo, diesel leaking from the ship's engine raised fears for the environment.

Sri Lanka's air force said the week-long fire had damaged much of the Panamanian-registered New Diamond's super structure, as well as the engine room and living quarters.

While the cargo of 270,000 tonnes of crude oil was unaffected, some of the 1,700 tonnes of diesel fuel had leaked into the Indian Ocean, creating a half-mile slick visible from the air.

"We have observed no smoke or flames from the tanker since this morning," air force spokesman Dushan Wijesinghe told AFP. "But tug boats are spraying water to cool the vessel."

Officials said they hoped experts flown in by the Dutch salvage company SMIT would be able to board the tanker later Wednesday or Thursday to carry out an assessment.

Sri Lanka was taking precautionary measures should the slick reach its shores around 70 kilometres (45 miles) away, Ranasinghe said.

"At the moment, there is no danger of the diesel reaching our coasts," he told AFP. "But, should the worst happen, we are ready to deal with that."

The diesel is thought to have seaped out when the ship's fuel storage tanks ruptured and mixed with sea water used to douse the flames.

The tanker was travelling from Kuwait to the Indian port of Paradip carrying crude for the Indian Oil Company.

The major fire was thought to have been completely doused on Sunday, but reignited a day later as heavy winds lashed the extremely hot surfaces of the stern.

Strong winds also pushed the crippled vessel about 20 kilometres (12 miles) closer to Sri Lanka's eastern shores on Tuesday, but it has now been towed further out, the Sri Lanka navy said.

The ICG said it provided 2,200 kilos of dry chemical powder to the Sri Lankan air force to drop on the burning tanker on Tuesday as a fire retardant.

The blaze had weakened the structure of the 330-metre (1,089-feet) tanker and the vessel was listing slightly to port, the ICG said.

Sri Lanka's chief prosecutor, Dappula de Livera, told local marine authorities to pursue a claim for damages and order the owners to tow the tanker away from Sri Lankan waters.

In July, Japanese bulk carrier MV Wakashio crashed into a reef in Mauritius, leaking more than 1,000 tonnes of oil into the island nation's pristine waters.