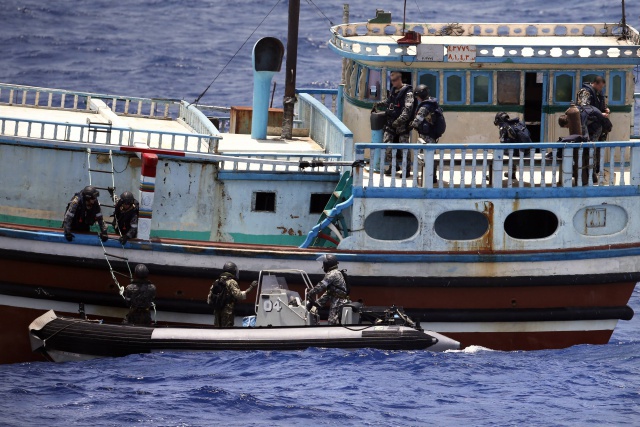 (Seychelles News Agency) - The United Nations Office on Drugs and Crimes, UNODC, through its Maritime Crime Programme is working to develop information sharing, joint investigations and legal responses programmes in Seychelles, Tanzania and Sri Lanka to tackle the rise of drug trafficking on the southern route, particularly in the Indian Ocean.

According to UNODC’s Executive Director Yury Fedotov this is necessary to prevent "…a culture of impunity on the high seas" from flourishing.

Fedotov was speaking at a special event organised by the United Nations Office on Drugs and Crimes, UNODC, on Tuesday September 8, in Austria’s capital city of Vienna.

“In doing so, UNODC is seeking to leverage its invaluable experience of working with East African states to successfully prosecute and incarcerate pirates,” he added.

The rise of maritime southern route being used for narcotics trafficking and the prosecution of drug traffickers caught in international waters were the main topics of discussions during the Vienna meeting on Tuesday.

‘Success of the Piracy Prosecution Model: A Blueprint to End Impunity at Sea’ was the theme chosen for the event.

"As we have seen, drug seizures alone have not deterred the criminals, who remain at large due to a lack of enforcement capacity. If we want to contain the problem of heroin trafficking through the Indian Ocean, we need to explore options for prosecuting drug traffickers."

The lack of proper mechanisms there have been several cases of drug traffickers caught in international waters being set free.

According to UNODC, 4,200 kilograms of heroin have been seized by the Combined Maritime Forces (CMF) during counter-piracy and counter-terrorism missions in the waters off Africa, the Middle East, and South Asia over the past 18 months. But the fact that the seizures took place in international waters nothing could be done to prosecute the traffickers and they had to be set free.

The Seychelles Minister for Home Affairs and Transport Joel Morgan who also attended the special event in Vienna, expressed the Indian Ocean archipelago’s commitment to support the efforts of UNODC to tackle this problem.

"Seychelles intends to leverage its successful counter-piracy programme to confront transnational organized crime, especially trafficking of illicit drugs and weapons. Central to this work is the Regional Fusion and Law Enforcement Centre for Safety and Security at Sea - REFLECS3 - which has a wealth of experience coordinating and analysing information from different law enforcement and military intelligence centres around the world," said Morgan in his presentation.

In recent years UN funding, worth in excess of $ 4 million, has significantly increased Seychelles’ capacity to counter piracy and helped the island nation become the most active piracy prosecution centre in the region.

Seychelles has prosecuted the largest number of Somali pirates compared to other countries of the region between 2009-2013. To date some 124 pirates have been convicted, at least 23 others are awaiting trial.

The need to use the acquired expertise to focus more on maritime security in the region such as organized crime; drug trafficking, arms trafficking, human trafficking and instability through acts of terrorism amongst others had already been discussed in May this year, when UNODC’s new Regional Representative for Eastern Africa Jose Vila Del Castillo met with Minister Morgan in the Seychelles capital of Victoria.

According to the UNODC the delivery by sea of heroin and other drugs to Africa, Europe and Asia has seen a dramatic shift towards the Southern route over the last four years.

The organisation states that traffickers are using dhows sailing from the Makran coast to transport the narcotics adding that the consignments are then transferred to smaller vessels destined for the East African coast.