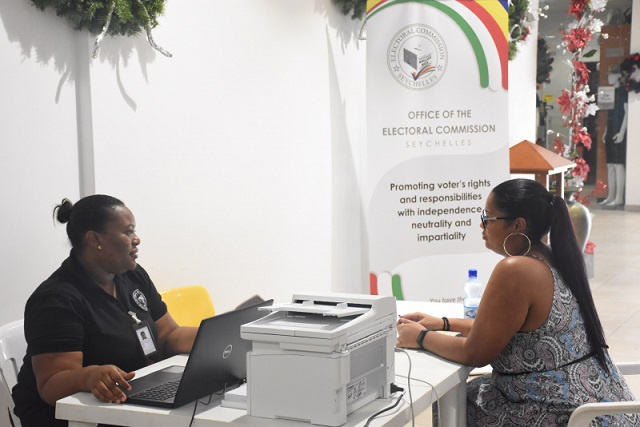 Lucas said that there are procedures in place and the law does not permit the Commission to simply transfer people on the register. (Thomas Meriton)

(Seychelles News Agency) - The Seychelles Electoral Commission has refuted an allegation made on social media that there are attempts to tamper with the voter register to give advantage to a certain political party in the legislative election.

The chairperson of the Electoral Commission, Danny Lucas, told a press conference Friday that the rumour being shared is that the commission is tampering with the register and is transferring voters from one district to another to give leverage to one party.

"I categorically deny this allegation. This is bringing into disrepute the whole organisation. Firstly, the way the organisational structure has been laid out, there is a separation of power, and it is difficult for anyone to tamper with the voters register," said Lucas.

He added that there are procedures in place and the law does not permit the Commission to simply transfer people on the register. For a transfer, there needs to be an application at the regional level.

"The application is then sent to us. We then physically verify if the person is staying where he had applied to be transferred. It is the same procedure as for the first time voters," said Lucas.

In last week's press conference, the Commission said that the register of voters will be certified on September 15. Around 70,000 people are eligible to vote in Seychelles, an archipelago in the western Indian Ocean.

Presidential and National Assembly elections in Seychelles will take place simultaneously from October 22-24. The voter registration was closed once the election dates were confirmed on August 11.

On the question of can an independent candidate stand for both the presidential and legislative elections, Lucas said that the law states that an objection could be made by any other candidate during nomination.

"If this happens, the objection is taken up and our position at the Commission will be that the candidate will not be allowed to stand for both elections," he added.