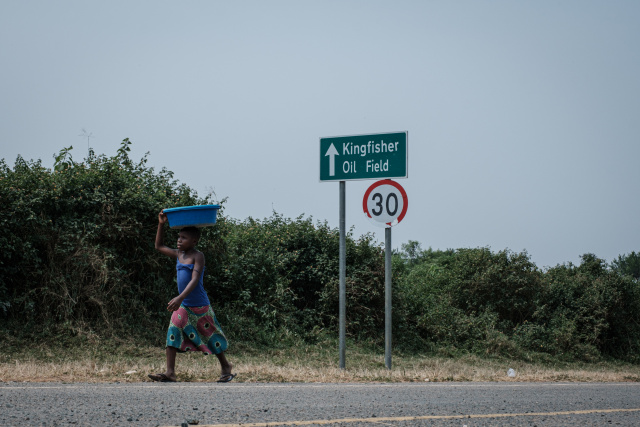 A girl walks past a sign of indicating where the Kingfisher oil field is, at the south-east of lake Albert in western Uganda, on January 24, 2020. When exploitable crude oil deposits were discovered in 2006 in the Lake Albert region, Uganda began to imagine itself as a new oil Eldorado. But 14 years later, the mirage has faded, and it is still waiting to extract its first drops of black gold.
This discovery had raised wild hopes in a country where 21% of the population lives in extreme poverty. The Ugandan government saw the prospect of earning at least $1.5 billion a year and increasing its GDP per capita from $630 to over $1,000. (Yasuyoshi CHIBA / AFP)

The project focuses on oilfields in landlocked Uganda discovered in 2006 and proposes pumping the crude to the coast via a pipeline across Tanzania at an estimated cost of $3.5 billion.

The multi-national plan is led by French petroleum giant Total in partnership with China's CNOOC and struggling British group Tullow Oil, which is seeking to finalise selling its stake in the venture.

"This is a very crucial project for our people," said Tanzanian President John Magufuli, who signed the agreement paving the way for the pipeline in his home town of Chato alongside his Ugandan counterpart Yoweri Museveni.

"Our signing today is a crucial step towards implementing the project which will not only create jobs, but also promote cooperation within the region, and stimulate economic development in areas the pipeline crosses."

Work is scheduled to start by the end of the year on the East African Crude Oil Pipeline to exploit oil discovered near Lake Albert discovered in 2006. Reserves in the area are conservatively estimated at some 1.7 billion barrels.

"We want our people to work fast and start this project," said Museveni at the signing ceremony.

After years of talks discussing the relative merits of different routes out to the Indian Ocean, Uganda announced in 2016 it would run the pipeline through Tanzania, not Kenya.

The enormous pipeline will run south of Lake Victoria to the port of Tanga near the Kenyan border.

Last week, a report by the International Federation for Human Rights (FIDH) based on studies with Oxfam said the project would affect more than 12,000 families and communities had no idea if their land would be lost.

"After nearly two decades of oil exploration, many communities fear the worst is yet to come," wrote Rashid Bunya of the Foundation for Human Rights Initiative, one of the NGOs that helped compile the reports based on two years of impact studies.

Critics say the project will affect delicate ecosystems that host rich sources of biodiversity. In Uganda, the drilling is located in several natural reserves, one of which extends to Murchison Falls, the country's largest national park.

Tanzania says the project will create 10,000 jobs and that more than 90,000 people would be compensated to pave the way for the pipeline.