Seychellois political parties can oversee ballot printing in Dubai ahead of Oct. vote 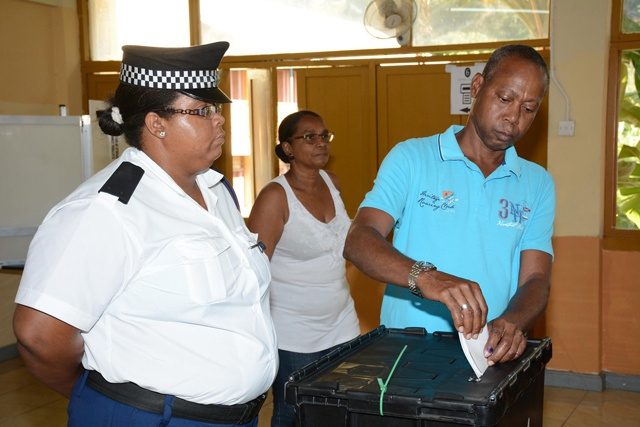 As there will be two elections at the same time, there will be a distinction between the presidential and legislative ballot papers. (Patrick Joubert)

(Seychelles News Agency) - Political parties contesting the presidential and legislative elections in Seychelles in October will each send a representative to supervise the printing of ballot papers in Dubai, said the Chairperson of the Electoral Commission on Monday.

Danny Lucas told a press conference that representatives of political parties were briefed on the subject in a meeting earlier Monday.

"After the nomination when we know who are the independent candidates we will have a briefing with them and find out whether they also would like to send a representative," added Lucas.

He added that around September 20, the Electoral Commission will send representatives to Dubai to ensure that everything is working correctly and see the facilities as well as prepare for the arrival of the political parties' representatives.

Lucas said that the delegation overseeing the printing of the ballot papers is expected back early October and will be quarantined for 14 days due to COVID-19.

"We have informed all political parties and they have agreed that this is the procedures in view of the circumstances. When the delegation returns the ballot papers will be handed over to another group from the Electoral Commission," said Lucas.

Another point raised in the discussion relates to how the markings will appear on the ballot paper.

"We have agreed with the traditional way of markings. This can be done through a cross or a tick. This should be done within the box given. We have this time decided to enlarge the box to reduce instances of voters marking outside the box," said Lucas.

Presidential and National Assembly elections in Seychelles, an archipelago in the western Indian Ocean, will take place simultaneously from October 22-24. The voter registration was closed once the election dates were confirmed on August 11.

The chairperson of the Electoral Commission said that political parties and the Commission have also taken a decision to address the issue of if a ballot paper is placed in the wrong ballot box since there will be two elections at the same time.

"We agreed that the most important thing to look at is the right of a person to cast his vote rather than looking at the mistake of dropping the ballot paper in the wrong box," said Lucas.

He added that there will be however be a noticeable distinction between the two ballot papers and an officer will be present to direct voters to the right ballot box.