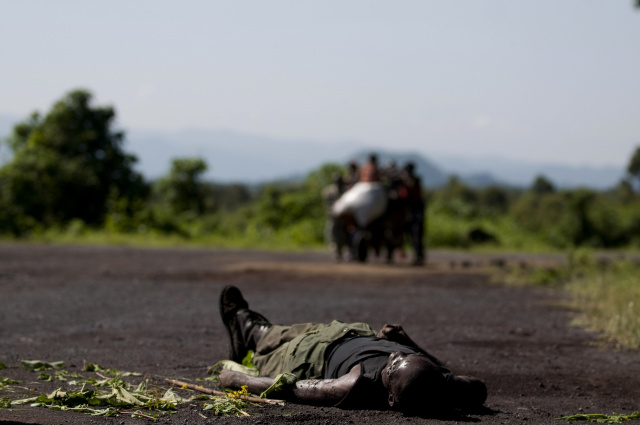 A group of Congolese Internally Displaced People push a cart as a Congolese soldier lies dead on the road from Goma to Kibumba on October 31, 2008 near Kibumba, 35 kilometers (21.7 miles) north of the provincial capital of Goma. The UN top human rights official slammed government forces in the Democratic Republic of Congo for lootings, killings and rapes in the city of Goma amid fears of a humanitarian disaster. (AFP PHOTO/Walter ASTRADA)

(AFP) - The United Nations voiced alarm Monday at an attack last week on a camp in Uganda that left 10 refugees dead and called for an investigation.

There are more than 1.4 million refugees in Uganda, according to the UN refugee agency, more than anywhere else in Africa.

Most come from neighbouring South Sudan, where civil war left some 380,000 dead and four million on the run.

The UNHCR decried the "disproportionate" reaction to a dispute between locals and refugees, which it said sparked the attack in the Rhino Camp, a major refugee settlement in the West Nile area near the border with South Sudan.

Ten people were killed and 19 others injured, while another 10 remained missing, UNHCR said, voicing deep concern for their safety and calling on authorities to search for them immediately.

The attack came after a dispute Friday evening between locals and refugees near a shared water point, which quickly escalated, the agency said.

Regional police, which had previously said six people were killed, told AFP Sunday that the violence occurred after refugees allegedly assaulted a grazer from the local community.

"The disproportionate violent reaction by the host community to a communal dispute signals a threat to the delicate balance of peaceful coexistence in the rural villages where refugees live alongside their Ugandan hosts," said Joel Boutroue, the UNHCR representative in Uganda.

"In an environment of scarcity of resources, tragic incidents such as that of last Friday are alarming," he said.

The UN agency called for calm and said it was working with authorities to ensure that "additional security measures are adopted, and this deadly incident is investigated to help clarify the circumstances, including the role of local authorities."

Rhino Camp, which hosts more than 100,000 refugees, is one of the largest refugee settlements in Uganda.