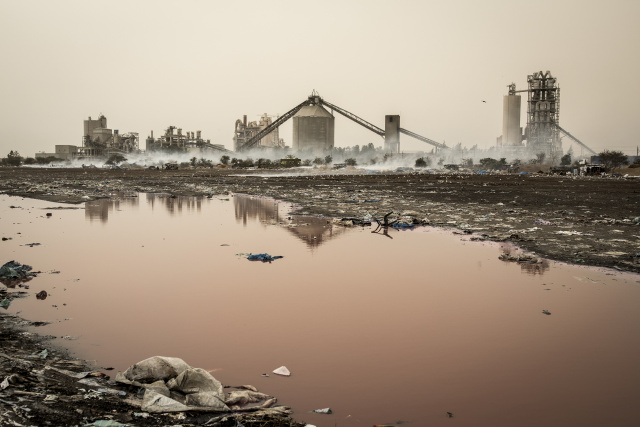 Smoke rises in-front of the SOCOCIM cement factory as artisanal fish smokers work along the coastline in Bargny on June 16, 2020. The coastline of Bargny is well known for being an environmental disaster. The small fishing village caught between a cement factory, an old coal factory and hundreds of Senegalese smoking fish along the shoreline that is exported throughout West Africa. (JOHN WESSELS / AFP)

(AFP) - Fish stressed by noise are less able to fight off disease while prolonged exposure can lead to an early death, according to research published Tuesday, the latest outlining the consequences of man-made clamour on the natural world.

Human noise pervades the environment, from the roar of vehicle engines to the clatter of industry.

Being underwater is no escape, with the whir of ship propellers thought to interfere with whale sonar.

Researchers at the University of Cardiff in Britain said noise pollution has been shown to lead to "stress, hearing loss, behavioural changes and impacted immunity".

But they said the ways in which noise affects resistance to disease had remained "neglected".

In their paper, published in the journal Royal Society Open Science, researchers tested the impact of random blasts of white noise played into fish tanks on the susceptibility of guppy fish to parasitic infection.

All fish were anaesthetised and infected with a parasite, either after the noise exposure in the case of the acute group, or during it for the chronic group.

A third control group of fish were infected but left in a silent tank.

The authors found that while the fish exposed to acute noise had the highest disease burden over a 17-day monitoring period, those in the chronic group were more likely to die earlier -- at day 12, compared to day 14 for both other groups of fish.

"By revealing the detrimental impacts of acute and chronic noise on host–parasite interactions, we add to the growing body of evidence demonstrating a link between noise pollution and reduced animal health," the authors said.

They added that this could have implications for fish farms, where the species being reared are highly susceptible to parasites.

There is an increasing understanding of the health burden associated with the cacophony created by human industry and transportation.

So widespread is the problem, they called for man-made noise to be treated as a "major global pollutant".