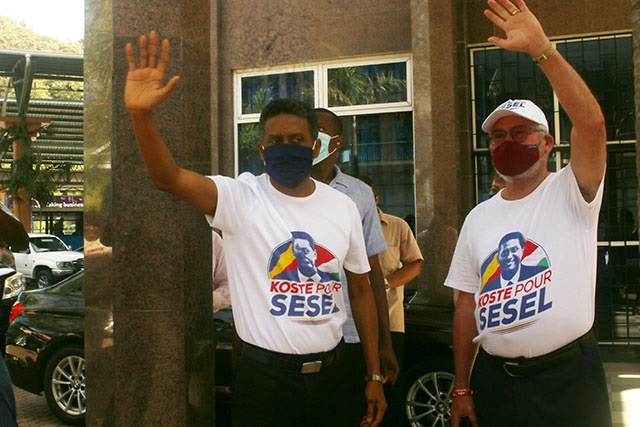 (Seychelles News Agency) - Presidential candidates who will contest the elections in October in Seychelles presented their nominations documents to the Electoral Commission on Wednesday.

The first potential candidate to register was the United Seychelles candidate, incumbent President Danny Faure, who presented his official documents to the Electoral Commission at the headquarters in the capital, Victoria.

Faure took the five-minute walk from State House to the Electoral Commission's headquarters as supporters cheered. He was accompanied by his running mate Maurice Loustau-Lalanne, and the president of the United Seychelles Vincent Meriton.

The president told reporters that the upcoming election is one of the "most important in Seychelles' history as it is taking place at a time when the country is facing economic and social difficulties brought about by COVID-19."

He called on citizens to exercise their right to vote to decide on the country's future.

"I call on all our citizens to engage in this process because this election is not about who wins or loses, but it will be one where you decide your future, that of the current generation and the country. I am ready to work for the people of Seychelles once again," he said.

Faure also called all citizens to respect the guidance of the health authorities.

"I know there is pressure everywhere for us to campaign as we had done in the past years, but we are not in a normal situation and I hope all of us understand this," he added.

The United Seychelles candidate is contesting the presidential election for the first time. He was the running mate of former President James Michel who handed over power to him in 2016, nearly one year into his mandate.

Presidential and legislative elections in Seychelles, a group of 115 islands in the western Indian Ocean, will take place October 22-24.