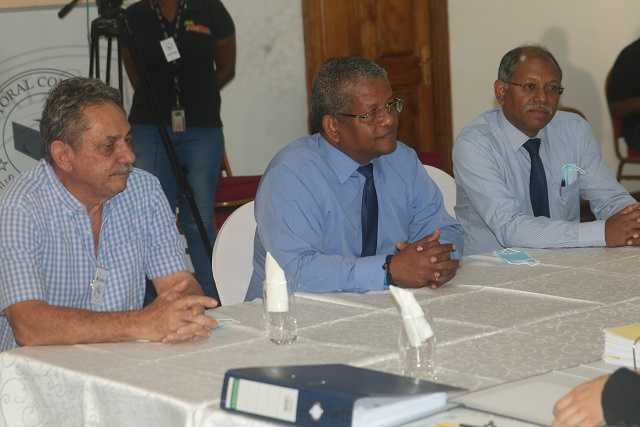 (Seychelles News Agency) - The presidential candidate of the Linyon Demokratik Seselwa (LDS) political party, Wavel Ramkalawan, was the second candidate to present his nomination documents to the Electoral Commission on Wednesday.

Ramkalawan was accompanied by his vice-presidential running mate, Ahmed Afif, and party leader Roger Mancienne to the commission's headquarters at the ex-SACOS tower in Victoria.

Nomination documents for a presidential candidate are nomination form, a certificate from the Electoral Commission certifying that the candidates have deposited the sum of R15,000 ($837) as a deposit as well as a list of 500 supporters who are registered voters with copies of their ID cards among other documents.

Ramkalwan told the press that for LDS this is an important election, a mission and a vocation.

"It is important to say that for LDS this election is not only about getting votes. We want the people of Seychelles to reflect deeply on what they are going to do and think about the challenges that the country is going through. Seychellois need to make a good decision on election day," said Ramkalawan.

The LDS presidential candidate said that he is not afraid of hard work and overcoming obstacles and added that as per the party's theme this year "Seychelles is for all its children which means that LDS wants to work for all the citizens of the island nation."

Ramkalawan said that "today is almost 30 years since I started in politics. Since the first day, I have been fighting to achieve a lot of the things that have been materialised. I have always believed in Seychelles and this is why I have never stopped."

"The challenges are big and COVID has brought with it other challenges but I am confident that with the programme that LDS has, we will not only see our children get back the will to study but that the nation, in general, will have a better chance at justice and our economy will rebuild itself," he continued.

Responding to a question as to if he sees this election going into a second round as was the case in 2015, Ramkalawan said that this decision is entirely in the hands of the electorate and "I will respect the decision that the Seychellois people make."