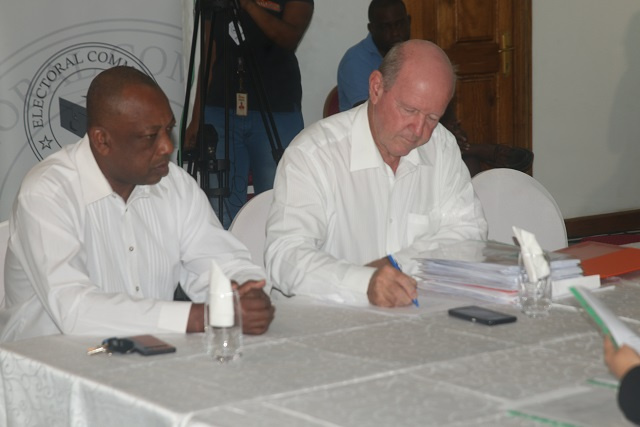 (Seychelles News Agency) - The candidate of One Seychelles, Alain St Ange, was the third to submit nomination documents for the presidential elections in October to the Seychelles Electoral Commission on Wednesday.

St Ange, who is participating in a presidential election for the first time, said that the people of Seychelles have an important choice to make in October. He was accompanied at the nomination by his running mate former minister Peter Sinon.

"This choice will depend on if we are satisfied with the current status of the country. Every voter needs to ask themselves if the one they have put in power in the past has delivered. If not, this is why we need to make a change," he said

St Ange, a former tourism minister, added that he is convinced that the election will be going into a second round and One Seychelles is prepared if that happens to go into a coalition with another opposition party.

"Compared to another opposition political party which has expressed radical change to the country, we want to bring a change that will gradually transform Seychelles. We have experienced radical change during the coup d'etat on June 5. We are proposing to offer real change," said St Ange.

He said that One Seychelles wants to stop the old ways of doing things such as marginalising people because of their political affiliations and also "advocating a technocrat government whereby people are trained properly in their respective field."

Four candidates have presented their nomination documents to stand in the upcoming presidential election in Seychelles, an archipelago in the western Indian Ocean, from October 22-24.

Politics » Be a reporter: Write and send your article » Subscribe for news alert
Tags: One Seychelles, Electoral Commission