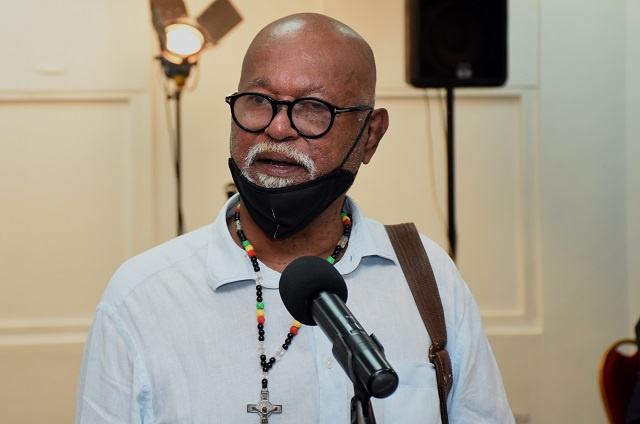 Pillay said that the Commission should have counted the names on the list in front of him instead of waiting for two hours to tell him that the list was not complete. (Joe Laurence, Seychelles News Agency)

(Seychelles News Agency) - Patrick Pillay has instructed his lawyers to file a petition for an injunction against the Electoral Commission's decision to disqualify his nomination as a presidential candidate for Lalyans Seselwa for the October election, Pillay told SNA on Thursday.

The chief electoral officer, Manuella Amesbury, told a press conference on Thursday that the nomination of Pillay has been rejected for not meeting some legal requirements.

"After Pillay submitted his documents two minutes before closing time we went into the verification stage of the documents by other candidates. One of the candidates, Wavel Ramkalawan, lodged an objection on the ground that the nomination had only 489 signatures and that one of them is not registered to vote," said Amesbury.

According to the Election Act, a candidate needs to submit a list of 500 supporters who are registered voters, copies of their ID cards and signatures of their endorsement.

The former Speaker of the National Assembly said that the Commission should have counted the names on the list in front of him instead of waiting for two hours to tell him that the list was not complete.

Pillay who was the fourth and last candidate to present his nomination documents for the election due in October arrived minutes before the deadline accompanied by his running mate Weston Wirtz.

The legal officer of the Electoral Commission, Salina Sinon, said that as required by law Pillay was invited to be heard on the objection.

"His response was that he had submitted a list of 504 supporters, and he does not personally know the one who is not a registered voter," she said.

"His nomination was then processed to see if it met the legal requirements. It was found that there were 489 signatures. Each person listed were checked and 25 of them were not found on the voter register," added Sinon.

She added further that "at 3.43 p.m. the running mate of Pillay, Weston Wirtz, showed up at the commission with a list of signatures claiming that Pillay had mistakenly omitted the list from the documents submitted. Wirtz was advised that it was too late to submit it as the legal cut-off-time for accepting documents is at 1 p.m."

The Commission said it is committed to running an election that is free and fair for all candidates and confirms that at no point were the documents delivered by Pillay tampered with by any third party or member of the Commission.

Three candidates -- Wavel Ramkalawan of Linyon Demokratik Seselwa (US), Danny Faure of United Seychelles and Alain St Ange of One Seychelles -- have been nominated for the presidential election in October.

Meanwhile, the chief electoral officer is calling on candidates for the legislative election to ensure that their nomination documents are in order before submission on Friday.

Both the presidential and legislative elections of Seychelles, a group of 115 islands in the western Indian Ocean, will take place October 22-24.