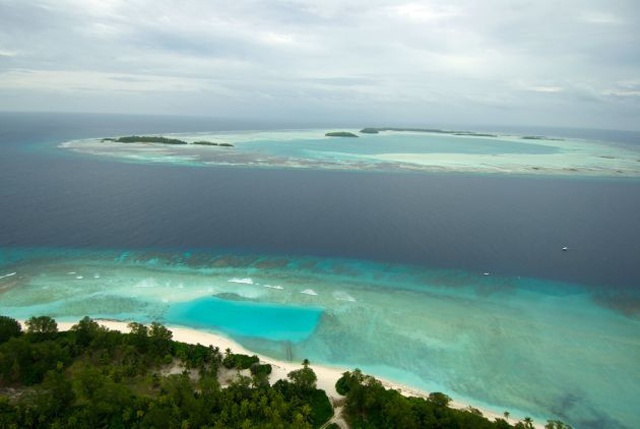 D’Arros Island and St Joseph Attol lie in the remote Western India Ocean about 250km form Mahe´ the most inhabited island in the Seychelles. Along with Alphonse Group, Desroches, Poivre and Farquhar, the five outer islands will see the implementation of a legally established programme for protected areas within the next five years. (Save Our Seas Foundation, Rainer von Brandis) Photo license: CC-BY 3.0

(Seychelles News Agency) - The Seychelles population of around 90, 000 people are mainly scattered on Mahé, Praslin and La Digue the three largest populated islands of the archipelago, which are part of the group of 43 inner islands.

The 72 remaining islands of the Seychelles archipelago are classified in the outer islands group and comprise of low-lying coralline islands, atolls and reef islands.

The Outer islands, are amongst the least known and least developed providing the perfect habitat for different plant and animal species. The few that have a permanent human presence account for a mere 2 percent of the archipelago’s total population of around 90 thousand.

With increasing demand for tourism development however, these outer islands have in recent years attracted investors seeking to provide the ‘Robinson Crusoe’ experience to travellers.

Consequently, Islands such as Alphonse and Desroches have been turned into exclusive or luxury resorts but still others have been left untouched and somewhat forgotten.

A new impetus for the conservation of Seychelles islands

After six years of study and evaluation, the Government of Seychelles, the United Nation Development Fund, UNDP and the Global Environment Facility, GEF, have come up with a list of the Seychelles outer islands that need to be protected.

These islands located at distances of between 230 to 1,150 kilometres from the main island of Mahe are Alphonse Group, Desroches, Poivre, Farquhar and privately owned islands of D’Arros and St. Joseph.

D’Arros and the St. Joseph atoll, situated only 2 km to the east, was officially made a nature reserve recently.

In an interview with SNA, the coordinator of the project, Joanna Prosper states that these islands have been chosen based on several criteria which include logistics, available infrastructure and personnel, their biodiversity and ecosystem values.

“These islands are easily accessible, with functioning airstrips and they contain globally significant biodiversity and ecosystem that is worth including in the protected areas of the Seychelles,” said Prosper.

With a budget of $1.7 million, the government of Seychelles will team up with non-governmental organisations and other partners in order to implement within the next five years a legally established programme for protected areas.

Through this programme, the biodiversity of the listed islands will be assessed and monitored with conservation program developed on each islands.

“We will also establish the necessary framework to support the management of the new protected areas such as development of a decision support system, creation of land use plans and an Ecosystem-Wide Zoning and Master Strategy,” stated Prosper.

Most of the outer islands are currently managed by non-governmental organisations such as the Island Conservation Society and Save Our Seas Foundation which will be very active in implementing the project.

“The Island Conservation Society, (ICS) will play a leading role in implementing on the ground activities at 4 sites and D’Arros Conservation Centre (DRC) at the 5th site,” Proser explained to SNA.

Contacted via e-mail, the Chief Executive Officer of ICS, Ahab Downer, says that this will allow the small NGO to “further train our field staff, and other participating partners, in best practice conservation techniques and proactive natural resource and sustainable management procedures.”

The Seychelles Islands Foundation (SIF) which is already actively involved in conservation efforts at the existing Aldabra Special Reserve, a UNESCO world heritage site, is also expected to play a major role in this five year project.

Restoration of the terrestrial ecosystems and the management of invasive alien species on these outer islands have been heralded by non-governmental organisations such as Nature Protection Trust of Seychelles.

Responding to SNA in an email, the scientific coordinator of this NGO, Dr Justin Gerlach stated that “protecting habitat” is not enough.

“The habitats need management or, if they are degraded restoration. Some of the national parks in the coralline islands are mostly of no conservation value as they are just abandoned coconut plantations. With management they could be important locally.”

Island Conservation Society’s CEO, Ahab Downer, further noted that although the lessons learned throughthe implementation project “will have far ranging consequences for the archipelago as a whole, and provide models and tested methodologies for islands, archipelagos and SIDS beyond Seychelles.”

The project which received the approval of the government recently will help to further extend the percentage of protected areas in Seychelles this time to reach even the far-away islands. Already a little over 50 percent of the archipelago’s land territory and 1 percent of its Economic Exclusive Zone or EEZ are protected as nature reserves.