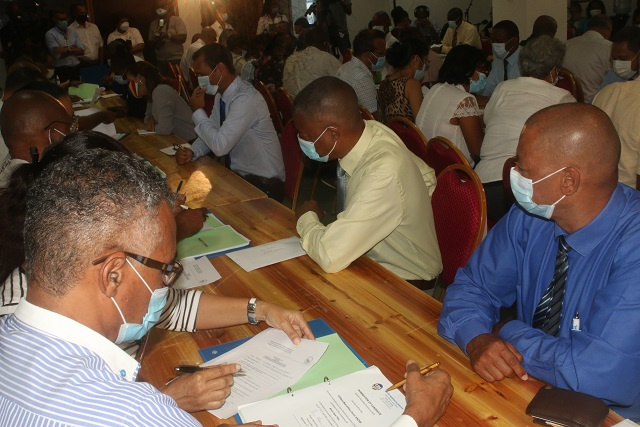 The legislative election will take place on the same dates as the presidential vote with an aim to reduce expenses as Seychelles faces an economic crisis brought about by the COVID-19 pandemic.

Linyon Demokratik Seselwa (LDS) presented the documents of their 26 opposition party candidates at 9.15 am at the Electoral Commission's headquarters at the ex-SACOS tower in Victoria.

The party leader, Roger Mancienne, told the press that the processes are going well, "though it is quite a complicated one considering the different factors affecting this election."

"We all agree that with COVID, the situation is different and there are certain measures in place that we need to respect. Though there is so much excitement in the air, everyone needs to remind themselves that there are measures in place that need to be followed. Everyone has realised that this is a procedure that is really important in our political life, where we are participating in a democratic procedure that is the basis of our society," said Mancienne.

Following the 2015 parliamentary election, for the first time in the country, the opposing party had a majority in the assembly.

"In the past four years we have worked really hard and we have used the position in politics to really push forward the agenda and the programme of LDS. We have done a lot of work in the districts hence we are really confident that we will win a majority in the Assembly as well as for the presidential election," said Mancienne.

The ruling party, United Seychelles, arrived at the headquarters at 10.30 am with 25 candidates for nomination. The party's candidate for Bel Ombre, Sheryl Louise, was unable to submit her nomination documents together with her fellow party members.

The party leader, Vincent Meriton explained that Louise slipped and had an accident the previous night while campaigning, and had to go to the hospital and could not make it to the headquarters on time. Louise arrived in a wheelchair at 12.00 noon to submit her documents.

Talking about the National Assembly nominees of his party, Meriton said that United Seychelles is presenting a mixed team.

"We have the youth and the experienced, men and women, professionals and politicians with maturity. It is a team that will support and collaborate with the government. We are also presenting a team that will support president Faure deliver his mandate for the people of Seychelles, a mandate where the main role is to remove the country from the economic difficulty that we are in," he said.