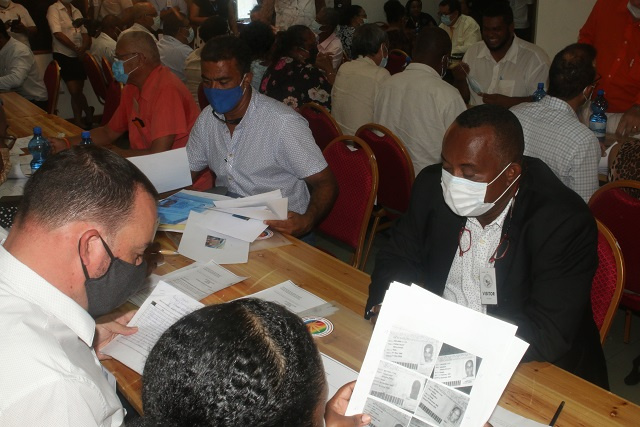 St Ange said that the 20 candidates are in districts where One Seychelles would win. (Joe Laurence, Seychelles News Agency)

(Seychelles News Agency) - One Seychelles will have 20 candidates running for the National Assembly while Lalyans Seselwa will have only four after the parties submitted nomination documents for their candidates to the Electoral Commission on Friday.

"We have not been able to fill up candidates for all districts. We have done this with the intention to focus on the districts that we would win," the leader of One Seychelles, Alain St Ange, told the press.

He said that One Seychelles is also giving support to an independent candidate standing for the St Louis district, located on the outskirts of Victoria.

"We feel that he is a good person for the job and when we find someone with potential we support regardless of his political belief," said St Ange.

Lalyans Seselwa submitted nomination documents for four candidates, and the party's leader, Patrick Pillay, told the press initially he had announced the participation of 10 candidates but "today we came with only four. This is because when they heard that I was disqualified in the race, the candidates became discouraged to stand."

Pillay's nomination for the presidential election on Wednesday was disqualified for not having a complete list of 500 supporters who are registered voters as a form of endorsement to the candidate standing.

On the question of why he is not presenting himself as a candidate for the National Assembly, Pillay said that he has other roles to play within the party and will focus on that. He said his proposed running mate, Weston Wirtz, has submitted his nomination for the central English River district.

Upon submission of the nomination documents, the proposed candidates, if certified, will be issued with a document by the Electoral Commission certifying that they are a candidate for the 2020 National Assembly election.

Among the documents that the candidates submitted were a certificate from the Electoral Commission certifying that they have deposited the sum of SCR1,500, a list of 50 supporters who are registered voters of the electoral area of which the candidate wishes to contest with copies of ID cards of all supporters who have signed.

Both the presidential and legislative elections of Seychelles, a group of 115 islands in the western Indian Ocean, will take place October 22-24.

Politics » Be a reporter: Write and send your article » Subscribe for news alert
Tags: Lalyans Seselwa, One Seychelles, Electoral Commission