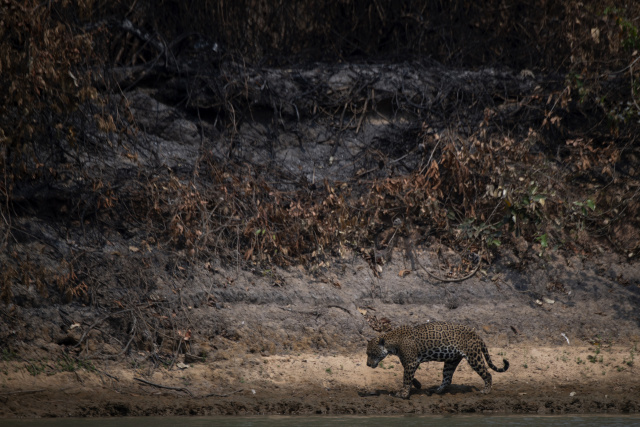 An injured adult male jaguar walks along the bank of a river at the Encontros das Aguas Park, in the Porto Jofre region of the Pantanal, near the Transpantaneira park road which crosses the world's largest tropical wetland, in Mato Grosso State, Brazil, on September 15, 2020. The Pantanal, a region famous for its wildlife, is suffering its worst fires in more than 47 years, destroying vast areas of vegetation and causing death of animals caught in the fire or smoke. (Mauro Pimentel / AFP)

(AFP) - Wildlife guide Eduarda Fernandes steers a speedboat up the Piquiri river in western Brazil, scanning the horizon for jaguars wounded in the wildfires ripping through the Pantanal, the world's biggest tropical wetlands.

Fernandes, 20, is part of a team of volunteers working to find and rescue jaguars wounded by the record-breaking blazes, which have burned through nearly 12 percent of the Pantanal.

"Our goal is to reduce the impact of the fires as much as we can, by leaving food and water for the animals and rescuing the wounded ones," she said.

The state park where she and her team are working, Encontro das Aguas, is known for having the largest jaguar population on Earth.

In normal times, it is home to at least 150 jaguars, a species classified as "near threatened" by the International Union for Conservation of Nature because of its declining numbers.

No one knows if they are dead, wounded or have fled elsewhere.

After a two hours searching by boat, the team finds a male jaguar resting on the river bank beneath a tree hanging with vines, his spots standing out against a pile of leaves left dry by the region's worst drought in decades.

They photograph it and evaluate from afar: the jaguar has an injured front paw that may need treatment.

Capturing a jaguar is no small feat. It takes tranquilizer darts, at least three boats and a lot of force.

The tranquilizer takes about 10 minutes to kick in, and during that lapse jaguars have been known to try to swim away.

They are excellent swimmers, but risk drowning when the drug takes effect.

As the team assesses the situation, sweating in the hot sun and surrounded by semi-scorched vegetation, the jaguar gets up to drink from the river.

That gives the veterinarians a chance to make a more precise diagnosis: he is walking gingerly, but does not appear to be in acute pain.

"He can probably recover on his own. Better to stand down" from capturing him, said Salomao.

He will return in a few days to see how the big cat is doing.

Another team is in a four-by-four traveling the dusty highway across the Pantanal, the Transpantaneira, setting out water and food for animals whose habitats have been destroyed in the fires.

These volunteers are from the Disaster Rescue Group for Animals (GRAD), which specializes in helping animals hit by man-made or natural disasters.

"The fires are a huge problem in and of themselves, but after that, the animals are left facing hunger and thirst," said veterinary student Enderson Barreto, 22, using thick gloves and shin guards to protect himself from being bitten by one of the region's many poisonous snakes.

Veterinarian Luciana Guimaraes is holding a small howler monkey that was hit by a car on the road.

"That's going to be happening a lot, because they approach the road looking for food and water," said the 41-year-old wildlife specialist.

Having traveled from Sao Paulo to volunteer here, she is trying to hold onto hope.

"Nature has a great capacity for recovery, even in a situation like this, where everything seems to have burned," she said.

"But it can take a very long time."