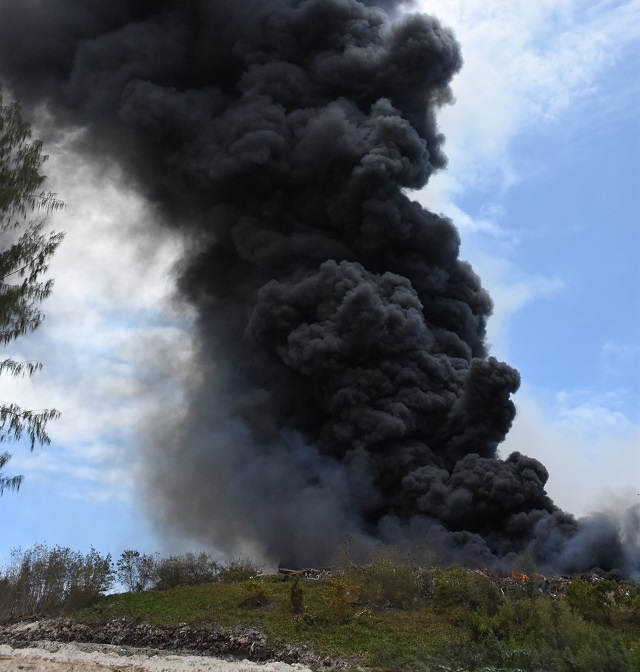 The closure of the schools – two private, six public, including two training centres – and the industrial estate was due to the health risk posed by the fumes. (Seychelles Nation)

(Seychelles News Agency) - A raging landfill fire that produced thick fumes from burning tyres forced the closure of eight schools and the Providence Industrial Estate on Monday as smoke affected wide areas of Seychelles' main island. Authorities said it may take days or even weeks to bring it under full control.

The flames had burned 85 percent of both landfill 1 and landfill 2 on the eastern coast of Providence on the main island of Mahe as of mid-day Monday, the chief executive of the landfill told SNA.

The closure of the schools – two private, six public, including two training centres – and the industrial estate was due to the health risk posed by the fumes. Authorities said that rain early Monday had not put out the fire and produced more smoke. The wind direction was pushing the smoke inland and affecting areas in the central and north of Mahe.

The chief executive of the Landscape and Waste Management Agency responsible for the landfill said officials' priority was to by Wednesday at the latest control and manage the smoke emissions so that the industrial estate and other facilities in the area can reopen.

"We are now in the process of entering the landfill, clearing all scrap metals and making space for excavators to create a buffer.  Sand and coral fill have been brought in for backfill to eliminate the risk of fire to private property," explained Flavien Joubert.

Authorities have said extinguishing the fire in its totality will take weeks.

The Providence Industrial Estate is the largest industrial estate in Seychelles and the second most important area after Victoria – the capital city. The area located on reclaimed land on the east coast of Mahe offers a variety of financial services, has many businesses, shops, auto dealers, workshops for mechanics, carpentry, other metal works as well as other enterprises involved in manufacturing.

According to the Seychelles Fire and Rescue Services Agency (SFRSA), the call relating to the fire came through on Saturday evening, around 7.30 and authorities are not clear on how it started. The annual clean-up the world campaign was launched in the 115-island archipelago on Friday and increased activity on the landfill to dump waste.

According to the public relations officer Jones Madeliene "it could have been someone smoking, all these are risks especially now that it is extremely hot." Madeleine explained that the fire first started at landfill 1 and firefighters along with key agencies involved were not able to contain the fire because of many challenges.

"We have had problems with water, machines, everything. On Saturday evening, our water pump burst and our machine used to cover fires, to make it easier to control, broke down. All of these coincidences have stopped us from doing our job properly," said Madeleine.

The firefighter added "it is not that we were unprepared, it's the stage in which the fire had reached. If it's a small fire, we can always manage it but this is a fire that has escaped us," he added.

The fire quickly spread to the second landfill and the responders used seawater and foam to fight the flames. The fire extinguishing effort was also assisted by construction companies UCPS and Vijay, which lent their excavators to cover the flames with soil. Vijay Construction also bought in its dredger to pump water from the sea. During Sunday, helicopters from the local company Zil Air were brought in to drop water on the flames.

Daniel Cetoupe from Department of Risk and Disaster Manager, coordinating the response on site said on Sunday "our greatest concern is that the fire has already reached the zone where tires are dumped and which is causing the black smoke. Tires, rubber in general, are harder to put under control hence all efforts are being put in containing."

As precautions as the fumes is still an issue, on Monday afternoon the Ministry for Education announced that 13 of its schools and creches will close on Tuesday, including the four that were closed on Monday.