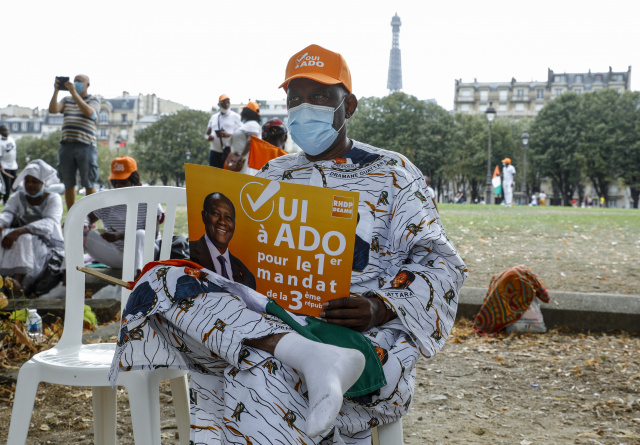 A man sits with a placard reading "Yes to a 1st term of the 3rd Republic" as French-Ivorians gather in support of a third term of incumbent Ivory Coast's President, in Paris, on September 19, 2020. The Ivory Coast's constitutional court on September 14, 2020 cleared the path for President Ouattara to seek a contentious third term. (GEOFFROY VAN DER HASSELT / AFP)

(AFP) - Tensions ratcheted up over Ivory Coast's presidential race on Sunday when former president Konan Bedie called for "civil disobedience" in response to Alassane Ouattara's bid for a third term at the helm of the West African country.

"In the face of abuse of authority, there is only one watchword: civil disobedience," he said to thunderous applause at a meeting of the country's main opposition parties.

"We are here to express our fierce opposition to this violation of the constitution," added Bedie, the flagbearer of the Ivory Coast Democratic Party (PDCI).

He did not elaborate on the form the civil disobedience should take and there was no call for an opposition boycott of the October 31 presidential election -- an option that had been mooted previously.

Bedie, 86, is one of only three challengers to Ouattara after the electoral commission excluded 40 other would-be candidates.

Gbagbo and Soro, both in exile in Europe, were represented by surrogates at the meeting.

Ouattara, 78, had said in March that he would not seek a third term but made a U-turn just four months later when his preferred successor, prime minister Amadou Gon Coulibaly, died of a heart attack.

The argument behind his bid turns on modifications to the constitution in 2016 which supporters say reset the two-term limits to zero, entitling him to run again.

The government has imposed a ban on demonstrations until September 30.

Some observers fear a return to the levels of violence that claimed 3,000 lives following the 2010 presidential vote.

The conflict was sparked when Gbagbo, then president, refused to cede to the victor Ouattara, upending Ivory Coast's reputation as a bastion of democracy in the region.

Gbagbo's candidacy was rejected on the grounds that he was handed a 20-year jail term in absentia by an Ivorian court last November over the looting of the local branch of the Central Bank of West African States during the post-election crisis.

He was freed conditionally by the International Criminal Court (ICC) in The Hague after he was cleared in January 2019 of crimes against humanity.

The former president is living in Brussels pending the outcome of an appeal against the ICC ruling.

Soro too saw his election application rejected because of a 20-year sentence, also in absentia, for the embezzlement of public funds handed down in April.

Soro provided military help that enabled Ouattara to come to power after the conflict, but the two men fell out in early 2019.

Bedie, Gbagbo and Ouattara have dominated Ivorian politics for a quarter of a century.