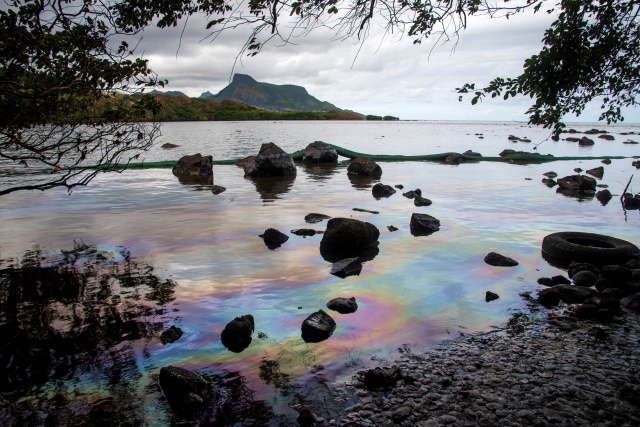 (FILES) In this file photo taken on August 15, 2020 shows iridescence on the water at the beach in Petit Bel Air, due to the oil leaked from vessel MV Wakashio, belonging to a Japanese company but Panamanian-flagged, that ran aground near Blue Bay Marine Park off the coast of south-east Mauritius. On July 25, 2020, a cargo ship loaded with thousands of tonnes of fuel ran aground off Mauritius, beginning the worst environmental disaster ever witnessed in the tiny Indian Ocean archipelago.
Two months later, Mauritius is still taking stock of the damage after its rich fishing grounds and sensitive marine habitats were befouled with oil, and public anger simmers over the government's handling of the crisis. (Fabien Dubessay / AFP)

(AFP) - On July 25, a cargo ship loaded with thousands of tonnes of fuel ran aground off Mauritius, leading to the worst environmental disaster ever witnessed in the tiny Indian Ocean archipelago.

Two months later, Mauritius is still taking stock of the damage, after its rich fishing grounds and sensitive marine habitats were befouled with oil.

The MV Wakashio, a Japanese-owned but Panamanian-flagged bulk carrier, was sailing from Singapore to Brazil with 3,800 tonnes of fuel oil and 200 tonnes of diesel onboard when it struck a reef off the southeast coast of Mauritius.

More than 1,000 tonnes of oil seeped from a gash in the hull before it was announced on August 13 that salvage crews had removed all the remaining fuel from tankers beneath the hold.

"Relatively speaking, it was not a big oil spill," said Sue Ware, a marine scientist from the Centre for Environment, Fisheries and Aquaculture Science, a UK research institute.

By comparison the ABT Summer, a Liberian-registered tanker, was carrying 260,000 tonnes of crude when it exploded off the coast of Angola in 1991, burning for three days before sinking with its cargo.

"The amount of oil is relatively small but in Mauritius it's a very key area for biodiversity," Ware said.

The accident occurred near two ecologically-critical sites: Blue Bay, known for its coral gardens and Pointe D'Esny, which hosts a fragile mangrove forest critical in the fight against global warming.

Also a short distance away is Ile Aux Aigrettes, a nature reserve home to endemic bird and reptile species.

About 50 melon-headed whales washed up dead off Mauritius at the end of August, infuriating the public, but a link with the spill has not been established.

- Will there be long-term damage? -

Conservationists are particularly concerned about the long-term ecological damage to the island's marine ecosystems.

"There is visible pollution, and invisible pollution. Some of the oil doesn't float but dissolves in the sea. The fish eat it, the coral absorbs it, it goes into the ecosystems," environmental expert Sunil Dowarkasing said.

The oil itself is known as VLSFO -- a fuel oil less viscous and lower in sulphur than conventional fuel oils.

But this newer generation oil is poorly understood in terms of its environmental impact, said Ware.

"They are quite new to us, compared to the heavy fuel oils that we mostly used to deal with... That is why we need to study this, and this will certainly help for future oil spills elsewhere."

- How is the clean-up progressing? -

Thousands of volunteers marshalled along the coast in the early days wearing rubber boots and gloves, scrubbing the shoreline clean and stringing together makeshift cordons to contain the oily tide.

Since then the government has identified 26 affected sites around the coastline and commissioned the clean-up operation to French company Le Floch Depollution and Greek outfit Polyeco SA.

"The work is progressing satisfactorily, but it is a very delicate clean-up operation, we must make sure that it is done in a methodical and systematic way," Environment Minister Kavydass Ramano said.

The clean-up is divided into four phases, and some sites are already in the second or third stage.

The ship eventually split in two and the bow and hull of the wreck were towed 15 kilometres (nine miles) offshore and sunk. The stern remains on the reef and the government expects to announce a contract to remove it within days, Ramano said.

- What is the impact on tourism? -

Mauritius is an ecotourism hotspot but the immediate impact of the oil spill on this sector has been difficult to establish as its borders have been closed since March 18 due to the coronavirus pandemic.

"It is absolutely necessary that this region is restored so that (tourist) operators and villagers are not the victims," Ramano said.

The island nation of 1.3 million people plans to reopen its borders in phases from October 1.

- What of the political fallout? -

A second rally on September 12 brought another 20,000 people out to Mahebourg, a fishing village near the spill site.

Frustration over the handling of the oil spill has heaped pressure on Prime Minister Pravind Jugnauth, whose administration has been dogged by allegations of corruption and nepotism.

"There is a general feeling of dissatisfaction, and Wakashio was the last straw," said Dowarkasing, a former MP.