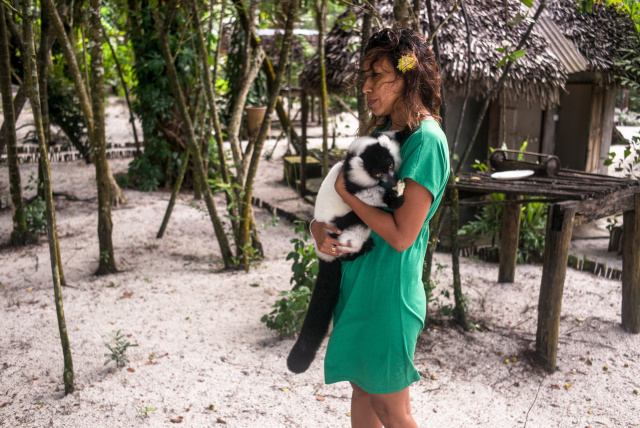 Angelique Decampe, co-owner of the Jungle Nofy Hotel, carries a young lemur Vari in her arms near the village of Manambato, Madagascar, on March 23, 2019. Angelique Decampe has been fighting for several years to protect the Vohibola forest from poachers of precious woods. For several years now, Vohibola Forest, one of the last primary forests in eastern Madagascar, has been illegally felled for charcoal production and the sale of rare wood. Some kill the harmless creatures for food, others sell them as pets -- and to get to their prey, they chop down precious tropical trees. (RIJASOLO / AFP)

(AFP) - Perched on a branch, the lemur blinks back intently at a group of gawking tourists disrupting a coronavirus-induced spell of tranquillity outside Madagascar's Andasibe national park.

The rainforest and animals thrived during five months of movement restrictions to limit the spread of Covid-19 in the Indian Ocean island nation.

But struggling tourist facilities breathed a small sigh of relief at the start of September when local nature-lovers were finally allowed to travel to the reserve, a four-hour drive east of the capital Antananarivo.

They now eagerly await the resumption of international flights, which bring visitors from across the world eager to catch a glimpse of the island's emblematic primates.

In the meantime, Malagasy families are using new-found freedoms to escape the city smog and admire their natural heritage.

"During lockdown, I really felt like leaving the capital and thought we should seize the opportunity to visit new places," says Linda Maminiaina, 22, admiring the lemurs with her parents and siblings.

A black and white Indri Indri, the largest known lemur, shrieked in the background. The species is critically endangered and a rare sighting.

"These lemurs are not in a cage but in their natural habitat," Linda's 20-year-old sister Prisca exclaims.

While the family gasps and points excitedly at the animals, French hotel owner Anouk Izouard still deplores the lack of visitors.

"The season is usually in full swing by now and we should be 90 percent booked," says Izouard, who also manages a restaurant and a small private reserve.

Local visitors are only using five to 10 percent of the facilities, she added. Most of her 100-odd employees remain out of work.

Coronavirus and its economic impact have also caused damage to the rainforest itself.

Ranger Pascal Pierre says local communities had started chopping down trees and selling them as firewood to make ends meet.

It is the first time he has ever come across this in over 30 years as head of the Andasibe forest guide association.

"Some also cut wood for construction, they are illegally exploiting the forest to earn money," Pierre lamented.

Logging could destroy the natural habitat of lemurs and other unique fauna Madagascar has to offer.

The country is a biodiversity hotspot and preservation of its fragile ecosystem is mainly funded by tourism, which accounts for around seven percent of economic activity.

Almost all of Madagascar's 100-odd lemur species are red-listed by the International Union for Conservation of Nature (IUCN), threatened mainly by deforestation and hunting.

Over 30 are classed as "critically endangered", the IUCN's last category before "extinction".