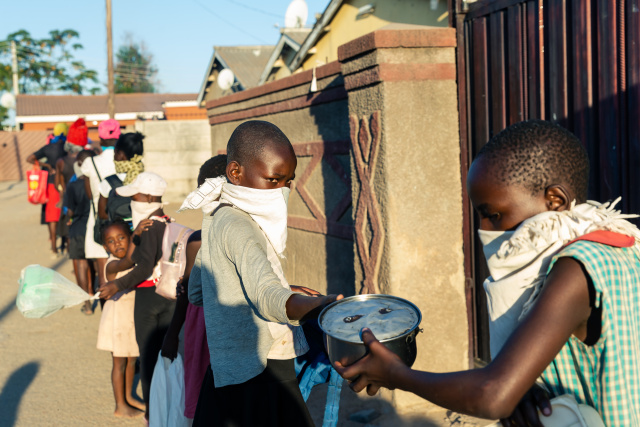 A queue of needy individuals with plates in hand forms outside Samantha Murozoki's home in Chitungwizaon May 5, 2020, where she feeds the underprivileged a free meal during the government imposed COVID-19 coronavirus lockdown period in Zimbabwe. With the help of volunteers Samantha Murozoki serves over a 100 hot meals per day from her home to underprivileged families whose household income has been cut off by closure of all informal markets during the lockdown. (Jekesai NJIKIZANA / AFP)

(AFP) - Zimbabwe's leader on Thursday appealed at the United Nations for support to end Western sanctions, saying that they set back development goals.

In an address to the UN General Assembly, President Emmerson Mnangagwa pointed to a recent UN report that found a negative impact from sanctions on Zimbabwe as a whole.

"These are a breach of international law and compromise Zimbabwe's capacity to implement and achieve Sustainable Development Goals," including eradication of hunger, he said.

"We therefore call on the General Assembly to strongly pronounce itself against these unilateral illegal sanctions," he said.

Zimbabwe has faced Western sanctions since the early 2000s but they have been focused primarily on the leaders, accusing them of corruption and gross mismanagement of an economy that has seen eye-boggling inflation rates.

But a report in November by the UN special rapporteur on the right to food, Hilal Elver, said that sanctions contributed to a poor climate for business and investment.

"These economic sanctions worsen the existing inequalities and do not have any actual impact on their supposed targets," she wrote in the report, which found that 60 percent of Zimbabweans were food insecure.

Mnangagwa took over in 2017 following the ouster of veteran leader Robert Mugabe -- who was known for his caustic denunciations of the West in fora such as the UN General Assembly.

But brief hopes for an improvement of relations subsided as Zimbabwean authorities under Mnangagwa have violently suppressed protests.