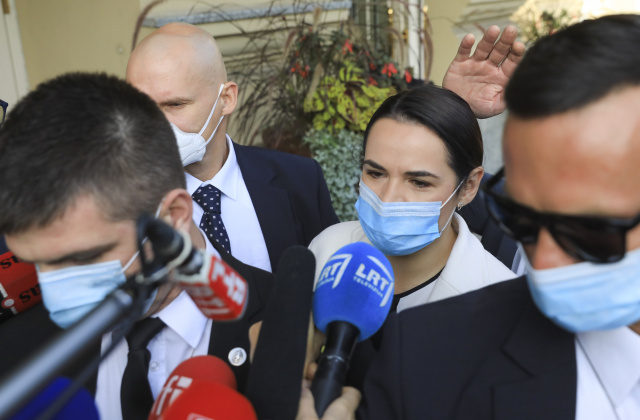 Belarus opposition leader Svetlana Tikhanovskaya is surrounded by media outside the Grand Hotel Kempinski after meeting with the French President in Vilnius, Lithuania, on September 29, 2020. The French President is on an official three-day-visit to Lithuania and the Baltic region. (PETRAS MALUKAS / AFP / POOL)

(AFP) - French President Emmanuel Macron on Tuesday promised to help with mediation in the political crisis in Belarus, but Russia's Vladimir Putin lashed out against "unprecedented external pressure".

Macron spoke during a visit to Lithuania after meeting with Belarusian opposition leader Svetlana Tikhanovskaya that was being seen as a major show of support for the activist.

"We will do our best as Europeans to help mediate and we will come back to OSCE mediation in order to progress," Macron told reporters, referring to an offer from the Organization for Security and Co-operation in Europe (OSCE).

"Our objective is for this mediation to begin in the next few days or weeks," Macron said.

"The aim is a peaceful transition, the release of people who are in prison for their political opinions and the holding of free elections under international observation," he said.

Belarus has been in upheaval since an August 9 presidential election in which Tikhanovskaya claimed victory against the incumbent Alexander Lukashenko, who has ruled Belarus since 1994.

Tikhanovskaya fled to Lithuania in the aftermath of the election as mass protests in the streets of the former Soviet republic were met with a crackdown in which thousands were arrested.

The European Union has refused to recognise the result of the presidential election and Macron on Sunday said that Lukashenko "has to go".

Tuesday's meeting with Macron in Vilnius was Tikhanovskaya's most high-profile one so far.

She has previously addressed the UN Human Rights Council and the European Parliament and has met with EU foreign ministers and the leaders of neighbouring Poland and Lithuania.

Tikhanovskaya, a political novice whose blogger husband is in prison in Belarus accused of trying to overthrow the government, told AFP after the meeting that she had accepted an invitation to speak before the French parliament.

She said the crisis should be resolved "as soon as possible" and new free and fair elections should be held before the end of the year.

"(Macron) supports the idea of mediation because he understands that powerful countries need to be involved to begin negotiations with Lukashenko. He is ready to help with this.

"I think he will speak with the Russian side about Belarus and will do everything possible to involve Russia in these negotiations," she said.

Macron has said that Russian President Vladimir Putin, Lukashenko's main ally, is favourable to mediation in the Belarus crisis by the OSCE.

But Putin on Tuesday said in televised remarks that Belarus was in a "difficult situation" and was facing "unprecedented external pressure".

Addressing a forum on the Belarusian and Russian regions, the Kremlin chief said that Moscow was ready to stand by Minsk, describing ties as "timeless and all-weather".

Putin has promised to provide Lukashenko with security assistance if the political crisis worsens and gave Belarus a loan of $1.5 billion.