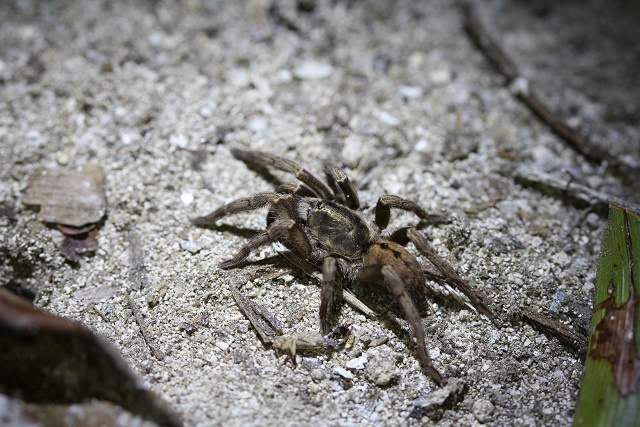 The population of the tiny endemic tarantula the ‘baboon spiders’which normally only reaches a length of 2.5 cm, has been described as stable on the Seychelles island of Fregate with the number of specimens estimated at 100,000 individuals.(Dane Marx)

(Seychelles News Agency) - The worst encounter a traveller could have when exploring the rainforests of the Seychelles might be debatable: could it be encountering a metre-long but non-venomous wolf snake, or coming across a foot-long giant millipede or even some unexpected stings from spiny-stemmed endemic palm trees?

Some might argue that the worst thing they could come across would be the sudden appearance of a large, hairy, stocky, eight-legged baboon spider, a type of tarantula.

Despite its unwelcome appearance, the baboon spider, like most creatures in the Seychelles archipelago of 115 islands, is considered harmless to humans.

There are three known species of tarantula in Seychelles, although little information was known about them until recently.

While working as a conservation officer on the Seychelles island of Fregate, located 56 kilometres from the main inhabited island of Mahé, South African Greg Canning found a strange habitat in the heavily vegetated island.

“I did not find the spider itself until I accidentally dug up some burrows. I immediately recognized it as a baboon spider but was unable to identify it,” Canning told SNA in an e-mail interview.

The species was confirmed as a genus of theraphosid spiders of the subfamily Ischnocolinae, otherwise known by its scientific name of Nesiergus insulanus.

“This species was previously known from a single specimen that was collected in 1903 from an unknown island,” said Canning.

Canning first had to find and describe a male of the species, and subsequently assessed the population and their behaviour in order to determine what threats they face, tasks which took about two years to complete.

Following the study, Canning partnered with a fellow South African researcher from the Tshwane University of Technology, Brian Reilly, to publish the first research paper on the species earlier this year.

The paper has been published in several conservation newsletters and has described the population of this tiny endemic tarantula which normally only reaches a length of 2.5 cm, on Fregate Island as ‘stable’ with the number of specimens estimated at 100,000 individuals.

Two other endemic baboon spider species have yet to be studied; the Nesiergus gardiner discovered in 1911 and the earliest species the Nesiergus halophilus, found by Benoit in 1978.

Unlike other spiders, the endemic ‘baboon spiders’ of Seychelles live in burrows lined with silk and emerge only at night to hunt for insects.

According to Canning, one of the biggest threats to this species is the destruction of their habitat due to human development.

“This is more so, in the case of Nesiergus insulanus as they do not disperse by ballooning as with many other spiders but simply walk into new areas,” explained Canning.

There are over 400 thousand known species of spiders in the world of which only nine are listed as vulnerable to extinction by the International Union for the Conservation of Nature, IUCN.

Dr. Justin Gerlach, the scientific coordinator of Nature Protection Trust of Seychelles, which is a non-governmental organization that works to preserve the species and environments of the Seychelles islands through practical conservation, research and publication, has welcomed the new research on tarantulas in Seychelles.

In an interview with SNA, Gerlach, who also chairs the Terrestrial and Freshwater Invertebrate Red List Authority of the IUCN, says tarantulas are under-researched and largely misunderstood and that more research needed to be undertaken on this species.

Gerlach admits that “very few people have ever looked for” tarantulas in the Seychelles, although he is of the opinion that they “seem always to have been rare”.

It is no secret however that the creepy-crawlies play an important role in the ecosystem.

In fact, Canning confirms that this tiny tarantula, is in fact “very beneficial in that it helps control other small animals that people may find to be unpleasant, such as cockroaches.”

Fortunately, Fregate Island, with its 16 luxury villas is renowned for its eco-friendly approach to tourism, boasting a high density population of birds, lush vegetation and pristine beaches and it is hoped that the tiny tarantula will not have to share its idyllic island home with others, for many years to come.